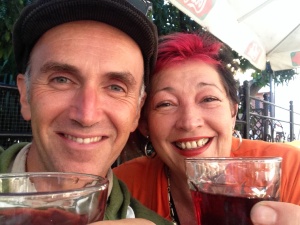 I only met Desley in 2010 though I feel like I’ve known her forever. She’s a fellow Bowen Instructor and was absent during my first Bowen Instructors’ meeting in Hobart but I had heard a lot about her from Gael and many others. When I met her at our next Instructors’ meeting in Sydney the following year it felt like we were great friends by morning tea. Whilst we were at the International Bowen conference in Italy last year she mentioned that she might visit us in Crete – and she worked toward it and made it a reality. Here are some snippets of the kids experience with ‘Naughty Aunty Desley’ as they fondly call her. (I’ll write a bit more at the end)
By Baba Miliking 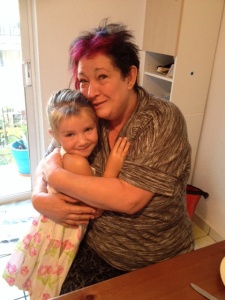 Desley was awesome cause she gave us ice-cream when baba and mummy were away. She looked after us on her own for two days.

Desley walked us to school lots of times and we looked for dolphins near the port.

Desley made this awesome lunch with veggies and other bits but I don’t know what they’re called – it was yummy.

One day Desley took us out for pizza at our local pizza shop near our house – called ELA.

Desley took us to sport one day. She is a very good cuddler. I miss her and love her up to the university (Zoi means universe) and back to the bottom of the dirt.

Desley came to visit us for three weeks from Brisbane in Queensland. Apparently it took her 32 hours to get to us door to door. Such a long time.

We did lots of things and went to lots of places with her. Like we went to Santorini together. She even let mum and baba go away for two days while she looked after us. We were on our best behaviour. She took us out to a pizza place and we had Hawaiian pizza (but it’s called Brazilian in Greece) and a Margarita pizza. We also went to the beach and watched a movie together. She also bought us the movie Phar Lap, Rio, Red dog and Madagascar 3 all the way from Australia. But we are only allowed to watch English movies on weekends. This weekend we watched Phar Lap – it’s an amazing movie about a famous racehorse from Australia – I think he was the fastest horse in the world. He died at the age of 5 and he wouldn’t have normally died at that age so I reckon he was somehow poisoned even though his trainer was with him all the time and even slept with him. I loved the movie – it’s a great movie. It is highly recommended by me. 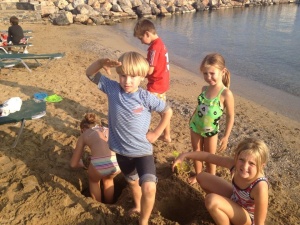 We played some games with Desley also down at the beach – like running games and stuff. Also while Desley was here I also did two runs – one 5km one and one 5.2 km run. I knew it was that much from a running app on my iPod so I was listening to music and running as well around the athletics/soccer oval. It has to do with some sort of computer work which I don’t even understand because it even estimates how fast I can run each mile.

My favourite thing that I did with Desley was in Santorini we went with her to the volcano and found out a lot of things about Santorini and how it was formed by the volcanic eruption.

Desley also gave me an awesome and pretty cool long sleeve sports top and a sports bag. I use it for soccer.
She also gave me something very useful which is a pocket first aid kit to put in my bag with band aids and other things to use and instructions about what to do – it even has a mask if someone needs to do CPR – I take it to most sports things that I do. The only person I know who has done CPR is My uncle Chich George who used CPR recently when he saved the life of one of his good friend’s dad who had a heartache. It happened at 6am and and my uncle heard noises and got his jeans on and ran downstairs to where the man was – he did CPR and the man was out for about 5 mins but George managed to save him and when the ambulance arrived there was a pulse. Also while my uncle George was doing the chest compressions he accidentally broke 2 ribs

Desley also did a Bowen to help with my soccer and to help me stand straighter like a proud boy – it was a very good Bowen too. PS – I’m usually looking down, with shoulders down but now I’m trying to stand straighter. Thanks so much Desley.
By Tobes

Desley bought me a microphone when she was in Athens – she saw it at a market and thought of me cause I like singing.

She also bought me a necklace and a bracelet and a hat – that I love. The hat looks like a priest’s hat in Greek church – the guy that you kiss his hand.

The bracelet is with beach crystals and shells. The crystals look like gold. It makes me want to rip them off and play pirate treasure but I wear the bracelet.

I loved going to the beach with Desley and we played in the sand. We made a giant hole and we made a hole bigger than my bed. We then decided what to do – Toby had a plan that we could make a house but I thought we could make a sandcastle TV. Then upstairs we were watching a movie and we went started to go to bed.

When Desley picked me up from school – we were at the port and we looked for dolphins – I saw one it was a baby and mummy one.

Thanks Desley for Coming – it was epic. 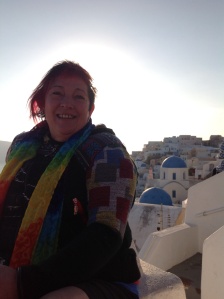 When Desley was here we went to Santorini with Millie Parkes as well. I liked Santorini- I liked the history of the volcanoes. Desley tried hard to find her special photo.

Desley was a great cook – when we had mashed potato she used the leftovers and put vegetables in them and made them into patties – they were delicious. 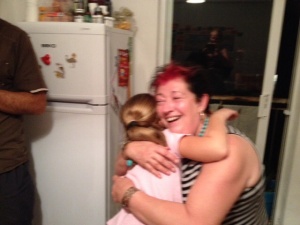 When she left she gave us all presents and I got a bag to put my swimming stuff in and when I go to sleepovers. She also gave me lip glosses and nail polish and hair ties. She was very generous. She also said a little story about all of us before she gave us the presents.

When mum and baba went to South Crete for 2 days we all helped out and had a good time. It was fun. The first day we went to the beach and Emilio and Toby played so much with the water and sand.

We took her to our favourite cafe called Dodoni and it’s voted the best ice cream in all of Greece. It’s so yummy.

Desley arrived on the 20th of October, a Sunday, and it was fun to have her around. After six days, on the 26th, we went to Santorini (you have already heard about this on other blogs). 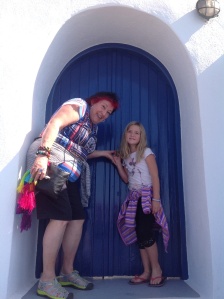 Desley is a really cheeky girl, she lets us stay up late and gave us lots of treats and presents.

On Wednesday evening before bed, she gave us some presents, and I got a beautiful bag, a headband and some hair ties. The next day Desley walked us to school, I held her hand the whole way. Later baba and Desley went to Athens. Desley left Greece on Saturday the 9th of November, she stayed twenty days in Greece. She stayed two weeks and six days.

It was such a treat to share our little town here with Desley – she really fitted in so well in Agios Nikolaos and also with our family and our schedule. She also met many of our friends here and won many hearts. We all miss her lots.
When we arrived in Crete after about 5 months on the road travelling here, mostly overland, Sandy and I decided we would have some time away individually to recharge our batteries. Life has been pretty busy with school and activities and new Bowen work so I decided to save up my days for when Desley came. We had a few days with our amazing friend Antonis (fellow Cretan Bowen instructor we both met in Italy) and spent her last two days in Athens. Great fun though that will be a topic for another blog…….

There are so many ways that we’ll remember Desley as she was so thoughtful in her gift buying for us – we only had one wine glass – now we have six – we’ll remember her when we have a drink. She bought us a big bathroom mat instead of those old towels we were using. She got us a potato masher so we’ll be singing her praises when we don’t have to make mashed potato with a spatula again and a three tiered metal fruit bowl which is gold as we had bags of fruit strewn around everywhere cause we have such little storage space. Last but not least a huge blanket for Sandy and my bed as the nights are getting chillier and a sheet isn’t quite enough anymore. All very thoughtful and practical presents that mean she’ll be here with us through our time in Crete. 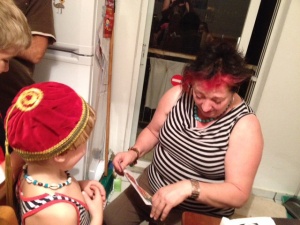 One of my most beautiful memories of Desley’s visit is our wonderful dinner the night before we went to Athens. We had just been to ‘gymnastiki’ (like little Athletics), we had a glorious dinner which included Desley’s favourite – eggplant chips and we exchanged gifts. She said some beautiful heartfelt words to each child and they said some back to Desley about what they enjoyed and wanted to thank her for as they gave her a little present each. They were so sincere and thoughtful. It was a very beautiful moment that I wish I had on video though will hold the beautiful memory in my heart.
By Christos

I barely knew Desley before she arrived for almost 3 weeks, I had met her only once. So having her in our home was a matter of trust and belief. And that’s what grew more and more as we chatted, played, cried, ate, drank and wandered this magnificent town and land together. She cared for our kids, she grew bonds with our friends, she took time out, she created meals, she spoilt us all with gifts and she made cups of tea and alcoholic beverages, we nurtured each other’s souls. She fit in incredibly, I think she’ll be back in Crete in her lifetime. Desley’s planned visit also inspired our Santorini sojourn which was truly beyond imagination…we found the perfect sunsets, nourished our bodies and souls in the perfect bar with a view, and soaked up the sun… Thanks for choosing to holiday with us.
By Mama Miliking