I’m on a Flight back to Heraklion from Thessaloniki – a huge Greek city that is the closest airport to our village – Kato Ydrousa, in the province of Florina. 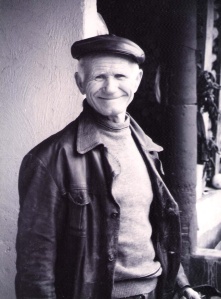 Even though I’m very excited to be going back to our home in Crete which I adore, I always get quite sad when I leave the place where I was born. Mainly because I don’t really know when I will return. As I say goodbye to my Papou (grandad) I think it could possibly be the last time I see him as he’s 92 years old. I guess I can say that about anyone as there aren’t any certainties in life, though it hits home more when you say goodbye to older relatives. Each time one of my older relatives dies the village is changed forever – Or rather my experience of it. I remember the first time I came back after my grandmother died was awful. She was one of the most important people in my whole life. As her oldest grandchild we had a huge bond and would talk to each other at least weekly. I couldn’t imagine the village without her, without the smell of her peppers roasting on the black wood heater. The village had to be reborn for me – there was no choice. As the cycle of life continues so does the village change. Also now, I can’t imagine the village without my grandad’s tomatoes, or his chickens and most importantly with his huge smiling grin.

In this blog I would like to pay homage to my beautiful Papou and Yiayia.

My Papou Doni (Antonis Tziatzos) was born on the same date as me – 15th January in 1922. He was the oldest child of Anastasia (we called her ‘Nane Nasta’) and Thanasi (Papou Thanasi).
As a fellow Capricorn my Papou is a very strict and energetic man who enjoyed his early morning routines and working hard most of the day. He still gets up early in the morning and is very fit for 92 yrs old – he still has a very large garden where they grow most of their veggies.

My Papou was the oldest of five children, four boys and a girl – Ilias, Margarita (Lita), Georgios and Thomas. During the post WW2 civil war in Greece he escaped having to fight in the civil war as they took his brother Ilias instead. As all males in Greece he did have to do his army service in which he actually got to see a bit of Greece outside the small mountainous province of Florina where he grew up and lived all his life.

Normally in Greece the oldest son gets to inherit the house and the wondrous joy of living with his parents once he marries and has children. Sometimes the other boys gets to live on the second floor of the house. Or if the family is wealthy enough in a house close by. This wasn’t going to be possible for my grandad. How would they divide the small modest house amongst four brothers? When he got married to my Yiayia they lived in the family home for a little while though they were very lucky that my Yiayia had a childless aunt who took them in and they lived with her and her husband. 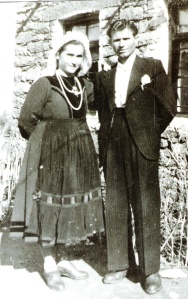 By this time my mother, Vasiliki, was born and was a five month old baby. I bet they were pleased at the extra space and I bet my ‘Nane Parako’ (my Yiayia’s aunt) was so please to be able to live in a house with new wonderful babies. A definite win-win.

Two other sisters were born who died at a very young age. Then my aunts Kouli and Seve were born. Three lovely young girls running around the house in the 50s when the civil war had ended and life was tough – it was definitely a hand to mouth existence though at least it wasn’t war time. 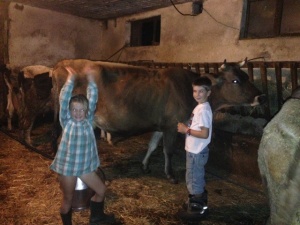 The family had cows in the barn in the yard that were there 24/7 during the harsh winters and then would be walked out to the fields (from morning milking time to evening milking time) from mid spring to mid autumn. This would give them enough milk for their needs as well as yoghurt and sour-milk. The rest would be sold for money. In the fields they would grow the grain and straw that fed the cows all winter. Chooks were a given as well as pigs to fatten up till summer. Calves would be sold until they needed to retire some of the milking cows (the barn could only fit six comfortably). There was no refrigeration though the beats they butchered would be kept mighty cold in the cellar all winter for their food. It was quite a simple life. My grandparents were both very honest and hardworking people. My Yiayia was one of the nicest and warmest people I ever met but gee if you said a wrong word about any family member or someone she loved – wow! Let’s just say she was fiercely protective. 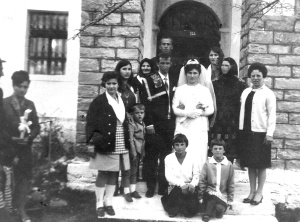 My parents lived across the road from each other all their lives. They married in 1969 and 9 months later I was born in the January when there was a snow blizzard outside.

It was all pretty special as I was the first grandson, first nephew, even the first baby in our street of the village at the time, so I just went from arms to arms and lapped up the attention. My grandparents and I had a very special bond and I would spend countless hours if not days at their house.

My father left for the big world of Australia when I was one year old – there just wasn’t any work prospects in our village apart from a subsistence existence with animals and a few fields dotted around the countryside. Luckily he had an Uncle – George who sponsored him to come out and live with him and his wonderful wife Aunty Nada and his three cousins Meri, Lorraine and Simon. When my dad left my grandad took on the protector role – which he always was anyway. He used to tell me stories of how sooky I was and they would have to take me to the doctors though he would always go with my mum.

My mum was pregnant when my dad left though sadly my sister Angelina who was born in November 1971 died at five months of age. This had a huge effect on my dad who never got to see his daughter.
Anyway life was very insular – we would spend most time with family. There were no cars, no local bus to take you into town 9 kms away. If you needed to go in you walked. The only transport was a horse and cart which was mainly used to do the field work and to cart the grain and barrels of hay back to the house. Life as good – it’s all we knew.
I don’t remember much more than tiny images of the time before I left the village when I was 3 1/2 yrs old. However I do have a strong memory of devastation at being taken away from my grandparents and the life that I loved. To be taken from there and plonked onto a big bird (a plane) and landing in a humongous city like Melbourne was pretty overwhelming.
It wasn’t till 7yrs later in 1980 that we retuned for 3 months. My grandparents beamed with joy as we arrived and 27 aunts, uncles, cousins and close friends filled the room to see us. It felt so strange and so normal all at once. The village was having a somewhat boom in the early 80s with growing strawberries for sale – it was fun working with my Papou, Yiayia and aunts picking the strawberries and putting them in neat boxes.
Cars were still a rarity and there was only one phone in the village – it was at the local cafe/shop – what we used to have to do if we wanted to call from Australia is do a ‘message call’ – the operator would ring the store and then give them half an hour or so to run up the hill and get my grandparents etc then we would call back and speak to them. How times have changed!

I came back to the village in 1986 for Christmas in between doing year 11 and 12 at high school. This trip really cemented my love and travel and my love of Greece. It took another seven years to come back and in this stage of my late teens and early twenties I went through a major change in my life, my personality and my passions. I decided it was bit boring to be Greek in Melbourne where there were half a million Greek people so I used to tell people I was half Ukrainian and half Dutch – that sounded much more exotic. However, in 1993, at the age of 23, I remember entering Greece by road through Bulgaria and had a sudden wave of feeling that this land was my home. It was a really special time. It was the first time for ages that I felt really proud to be Greek.
I also saw my grandparents in a different light. I was suddenly really interested in their history and so fascinated with all they had achieved in their lives. From that trip onwards I was so committed to being a big part of my grandparents lives and I always knew when I would be back. Even if it was after 5 yrs – I had a plan – and I think my grandparents enjoyed this too.

All in all I went back to our village 11 different times over 40 years – I guess on average every 4 years. As I mentioned earlier I was devastated when my Yiayia passed away because we were so close. She was ever so excited at being a great-grandma and always kept a small photo album in her apron to show to everyone that cared to look at it – actually she pretty much showed everyone – whether they had an interest or not.
She once said to me ‘Christos when you left for Australia I didn’t miss your mum at all, but I missed you so so so much – and now I just love these kids so much more than you.’ A kind of backhanded compliment I guess. 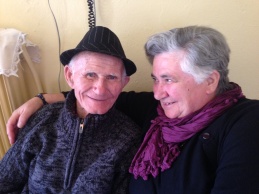 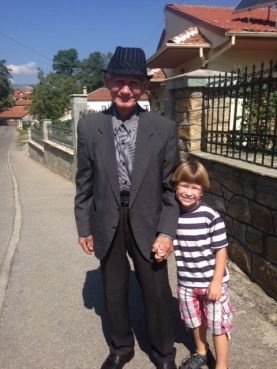 This year we have had the pleasure of going back to the village a few times and it’s been lovely to see the five kids relationship with my Papou developing. He just loves taking them down to the local kafenio (cafe) and buying them treats. Initially I told him to save his money but he just said ‘I’m 92 years old – I don’t know when I’ll get to see these beautiful kids again so if I want to buy them something I will.’ He’s a very sweet man and I actually love it when people say ‘you’re so much like your Papou Doni’.