When we arrived in London we arrived with the underground train from Paris. The London train station that we arrived in was very big and called Kings Cross – St. Pancras. We waited for about 30 minutes for Sally – she is my uncle George’s wife. So Sally picked us up from the train station and we went back to her share home. On Tuesday it was a bit rainy and we just stayed at the share home and there’s not much to tell you about our second day in London except that I went out with my baba for a few hours and we saw Big Ben, the London eye and the blue rooster in Trafalgar Square. 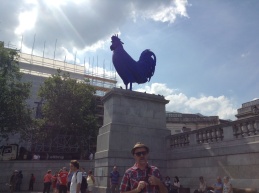 We sat down in a cafe for a while and I had a strawberry milkshake. On Wednesday my uncle George had another day off work and we went to Buckingham palace where we saw the guards with their big puffy hats – I thought they couldn’t even see. We also saw the Changing of the guards. After the palace we went to the Borough market to have lunch. I got a sausage. We also met my dad’s friend Steve. It felt great being able to speak English instead of Greek.
By Yasi

Quote by Yasi while walking with baba – ” London is sooooo old but it’s still so beautiful – I think it’s my favourite city.” 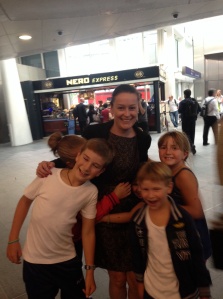 We met our aunty Sally at the Kings Cross train station. We went to her house and watched tennis because it was the first day at Wimbledon. We also played games and relaxed. That night we didn’t see our uncle Chich cause he was working late. Next morning Chich had a day off – when he woke up he made us his super cool pancakes. 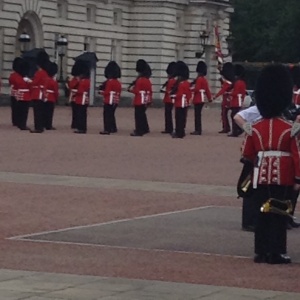 Staying with Chich and Sally was awesome because there was lots of things to see and do like the Changing of the guards at Buckingham palace. I think their fluffy hats look ridiculous. 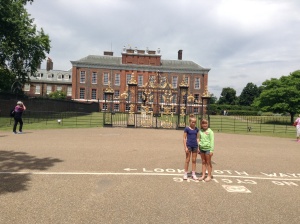 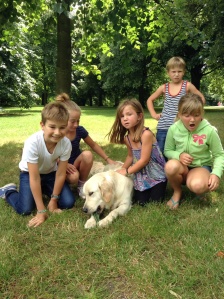 We went to the park right outside William, Kate and Prince George’s palace. There we met one of baba’s friends called Penny and her dog Toby.

Penny is married to Alex who is my baba’s cousin. 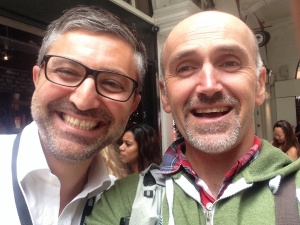 Before Toby flew to London he had to have all his checks by a vet and stuff like that. His owners – Penny & Alex moved to London from Melbourne for work. They couldn’t bear to leave poor Toby behind. He even has a doggy passport.
We went to a market calked the Borough market and Chich got us the most awesomest meringues and lamingtons. 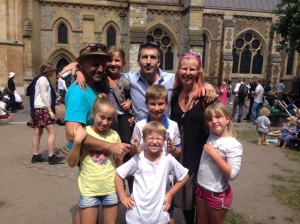 We met one of baba’s friends called Steve (they went to university together in America) and I told him my name was meat pie cause I was eating a meat pie at the time.
We went over to Oliver & Amy’s house for a pizza and movie night. They had a really nice house and we got to watch a movie called ‘Meatballs’ where they turn food into water. It was an awesome movie.
Every night when Sally got home we all jumped on her and almost made her fall. She’s fun.

On the last night we went to the musical – Matilda. It was a bit different to the book but very very good. Miss Trunchball was actually played by a man. He was awesome but very scary.
Yia Sou, Για σου, by Kalika
💜✨😋 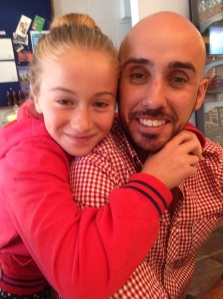 George and Sally are amazing – they are very loving and Chich was very nice to us even though he was very tired because in the last 48 hours before we arrived he had worked for 36 hours and only slept less that 12 hours in two days so that he could take 2 days off to be with us.

His shop is in Wimbledon and it’s a very good shop and lots of people go there – even tennis players. Maria Sharapova and Grigor Dimitrov go there every day. Also one of the days Sam Stosur went and my baba saw Leyton Hewitt there. Martina Navratilova said that his cafe made the best scrambled eggs she had ever had. If you want to go to try them it’s called ‘Brew’ and is on 21 High street in Wimbledon village. When I went there I had an amazing vanilla milkshake and some pretty darn good pancakes.

Sally is very very kind and nice. She picked us up from the train station and she is an amazing aunty. (Along with four other aunties that I’m very close to).

Sally and Chich were also very kind to us – they had to look after us when my baba and mama went to the movies and then out for dinner with friends. First they took us to the market to have lunch and then took us home and we hung out and had dinner. They let us listen to music and dance around and watch movies. It was like our own little party.
London is amazing. We saw the musical Matilda and it was excellent, even though I was very tired because I had gone to Wimbledon in the daytime. Kids that were Kalika’s age had bigger parts than most of the adults. I thought to myself – “how do they remember all those lines”? I think I liked Matilda the most – she was very funny at times and I loved the librarian. I liked it when Matilda was telling a story and the librarian said – “Hey Matilda this is such a sad story” and Matilda said “Do you want me to stop?” But the librarian said “Don’t you dare”. Miss Trunchball was a very funny character but I think it was a man playing Miss Trunchball.

Oliver and Amy – our friends that we met through Grandma and Pa and also my baba’s friend that he met at university in America also came. 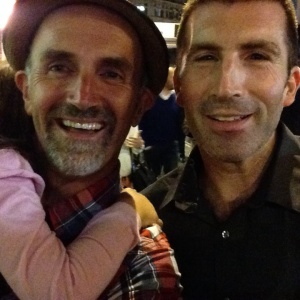 His name is Steve and he’s quite funny cause he likes to joke and he’s a funny character.
The musical is a bit different to the book but that happens in most musicals.

London is a wonderful and interesting city because there are lots of famous monuments and places. Like the Queen’s palace, the blue rooster in Trafalgar Square and the borough market was fabulous. I had a terrific gourmet meat pie. Also they had very good brownies. We had lots of fun in London.
By Tobes 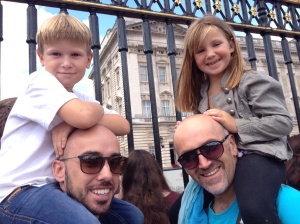 Bye Chich – we love you – thanks for all the treats!