On the way to Lima we stopped by Houston to visit our friends – Cathy C and Kathy K. We call them that because they’re

both named Cathy but different spellings. They are going to look after our car for 3 weeks and even drove us to the airport. They have three very cute cats and two dogs, one is very playful and loves people. However the bigger one for some reason is afraid and every time we go close to him he backs away. They have a pool and we played happily there for ages because it was so so hot. There were fun mats and a dive board. We had an extremely good Pizza for dinner and they let us stay up late watching a movie. It was about how Mary Poppins was made into a movie. When we get back to Houston we are probably going to watch at least five Harry Potter movies because Cathy C and Kathy K are very big fans of Harry Potter. I bet by the time we leave Houston we will be big fans as well. We haven’t read them so far or watched them because we heard they sounded scary. Kathy K said that at least the first two aren’t scary but maybe after the first two they get a little bit more scary. I’m actually looking forward to them now.
We had a short flight to Miami first and then we got on our way to Lima. Miami to Lima was an amazing flight because there was entertainment screens and we even had our own remotes and even had games. Three of the games that I loved was battleships, chess and golf. We haven’t been on many planes that have movies and stuff like that.
We got to Lima at 10.30pm. Harry Hildebrand who’s parents are our neighbours in the King Valley (and grandma went to school with his mum) picked us up. We weren’t expecting to see him so it was an amazing surprise and always good to see a familiar face. 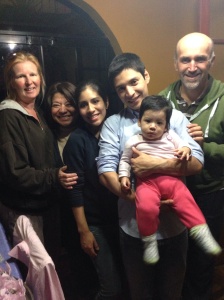 He took us to our Servas hosts where we were staying. We arrived after 11.30pm so we were all dropping off like flies. There were five people in the family all living there and it was a 4 bedroom medium sized two storey house. Most of us kids slept on mattresses or couches in the living room and mum and baba got to share a single bed but at least it was a bed.

The family were lovely. There was the mother Margarita and her adult daughters Jessica and Melissa.

Jessica was married to Dik and they had a 6 month old daughter called Alyssa. Her christening was the day we left so we helped them makes some chocolates and stuff for the party.
By Tobes 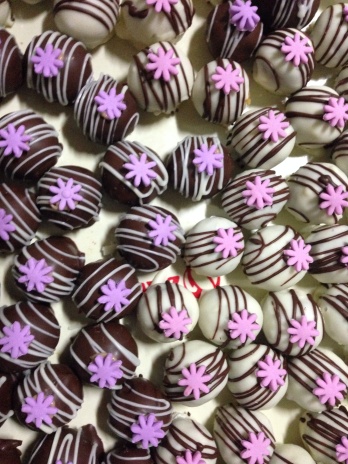 In Lima I loved the park at the zoo most of all and playing with my Lego.
By Zoi

I was so touched by staying with Margarita and her wonderful family. It was awesome to fly in to Lima and go straight to a wonderful Peruvian family. They were so welcoming and friendly. We arrived late in the evening and pretty much went straight to bed but we connected well straight away. I love SERVAS for these great opportunities which are a great and cheap way to travel but most importantly SERVAS is a group to promote worldwide peace, friendship and understanding between all people.

The next day our good friend from Australia – Harry came over with his son Luca to take us out for the afternoon. We had our introduction to one of the most delicious foods ever – ceviche – an amazing raw-ish fish dish that is actually cooked or poached in lemon juice and other spices. OMG – my mouth is watering and I have a new favourite food. Then we ventured down to the Lima zoo where the kids had a lovely run around together and we tried yet another Peruvian delicacy – picarones – a sweet potato donut cooked right in front of us – awesome.
The next morning the long journey to the Amazon jungle began…….
By Christos

One thought on “Enroute to Lima and the start of our Peruvian adventures…….”