Bill Clinton was the president of the USA for 8 years back in 1992.
Bill Clinton was a very good president and changed a lot of things. When he was the governor of Arkansas there was an argument between a school and black people and he set a rule so black people could go to that school with the whites. Bill Clinton also said to every one in America that the black Americans could work together with whites and it worked. 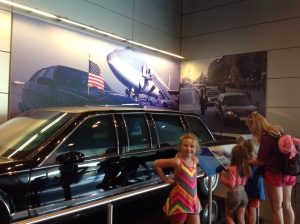 He seemed like a good person and tried to do lots of good things and help black people live the lives they deserved. We visited his museum in Arkansas and watched a short video by him.
By Yasmina

In Arkansas we stayed with our friends Oliver and Amy. Amy is from Arkansas and Oliver is from England. They were visiting Amy’s parents Debbie and Steve so we joined them for a couple of days. We’ve seen Oliver and Amy now in England, Greece, America and Australia. Debbie and Steve have a humongous house and they have a cinema with a humongous screen. The outside yard is really big too but we didn’t go on the grass without shoes because there’s this type of bug on it that burns your feet. They also have a beaver that visits the lawn but we missed seeing it. We did hear coyotes at night though because their house backs onto a forest. 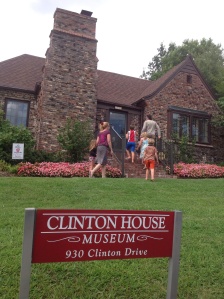 We went into the town of Fayetteville and had lunch in a nice cafe then went to the park to play. We were going to have a picnic at the park but it was so so hot and humid. We also visited Bill and Hillary Clinton’s first marital house. There was her wedding dress there and there was a garden of all the favourite flowers of all the First Ladies ever since America was free from England. 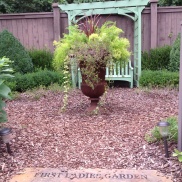 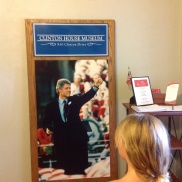 We played soccer at the park and the ball went in the creek but I went down to get it even thought the water was muddy.
When Steve got home from work he put a movie on for us in his cinema room – we watched ‘How to train your dragon’. It was great movie cause the boy proved everyone wrong – I like movies like that. After we finished the movie we made pizzas on the BBQ. It was so cool – we were given a base that was a little bit cooked then we got to do our own toppings and then grilled it on the BBQ. It was a strange way to do it but was very very tasty. 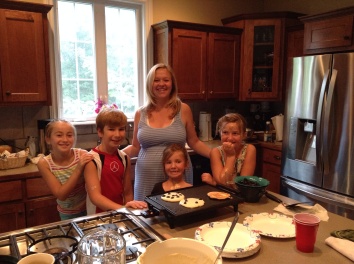 Next time we see Oliver and Amy they will have had a baby and will come to Australia to visit us.

Bill Clinton is an amazing man and one of my favourite presidents I have heard of. I admire the things he did like to reduce poverty in American and to raise the economy. In his 8 years of being president he made 20 million new jobs. I learnt all this from visiting the Bill Clinton library in Little Rock, Arkansas. There was A video that they played for us about his life and how he changed the face of America.
His dad died three months before he was born and his mother went off to New Orleans to study being a nurse so that Bill Clinton was healthier and had a good life.
When he was about 10 he was very inspired by Martin Luther King Jnr and his speech ‘I have a dream’. Apparently Bill Clinton said that remains his favourite speech of all kind. When we were in Fayetteville we visited his first marital house and it has been turned into a museum.
By Toby 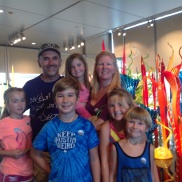 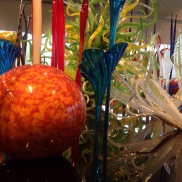 PS – I agree with Toby that Bill Clinton was a great president. Also I found it so interesting visiting his library with the kids because they were in awe watching the 20 minute video but obviously it was written from his and his supporters’ perspectives. It was obviously going to be positive. There wasn’t any mention of possible impeachment (didn’t know how I was going to explain that to the kids). Anyway it was a fabulous museum and great learning for the kids of the events that happened in his term. First presidential library that I had visited and it wetted my appetite to visit more of them. We almost stopped in at the George W Bush Museum in Dallas but it was $17 to get in and $11 for kids over 3 so far too expensive for us. Almost triple what the Bill Clinton library was. I was very interesting to hear George W’s speel on his term – he got in through disputed votes in the Supreme Court rather than a landslide like Bill Clinton and during his term the world changed in so many ways that I didn’t know how he would make a positive from it. Anyway – it’s an intriguing visit for another day. I think we will get to his dad’s library (museum) which is near Houston.
By Christos