This is an old blog that the three youngest kids wrote about our wonderful long weekend in Ios. It is often difficult to keep up with the blogs and it’s been sitting on my ‘To do’ list to upload for a while – however the kids have written it below as if it had just happened. I hope you enjoy it. Ios (and especially Meltemi Diving School) is such a special place and we highly recommend it if you’re coming to Greece. Enjoy!

We got a bus from Agios Nikolaos to Heraklion on Saturday morning and then caught a ferry to Ios. It went to three other places as well – Santorini, Ios and then Paros and last Mykonos.

When we arrived we went onto a little bus and then to Far Out resort. We put our stuff away in the little huts – us big kids in one and the others in the other one.

After we got our bathers on we went to the pool and swam and swam and jumped off the side and off the little bridge. It was so much fun. Then we lay on the chairs to dry and when the hammocks were free we ran to lie on them. There was lots of arguing over which hammock to be on because there were only three. When the people who were on the hammocks got bored the two others would run for the hammocks.

For dinner we walked around the beach to the opening of the best Restraunt on the island called Harmony which had delicious Mexican food. We met our friends Jason and Katherine – the scuba diving instructors and the two others who work with them – James and Lynne.
By Kiki

I like the ride I went on with baba and Yasi. It was called a Heaven ride. We had to wear a life jacket and we sat on a blow up green couch and we had to hold on. There was a rope and pulled by a boat with three people on it. There was also three people on the back – Yasi, Christos and me.
When we put our thumbs up the man driving goes faster. When you put your thumb down it means slow down. We didn’t tell the man to slow down, just to go faster. I loved it when we went over the waves and when the boat turned. At the end we jumped off the floaty thing and we swam to the shore where mummy was waiting,

I really liked the pool. It was great. We swam and jumped and we swam at the beach as well. It was lots of wet fun. We played at the beach and we buried Toby and we went snorkelling off the rocks. I like snorkelling. I think that’s all.
By Zoi 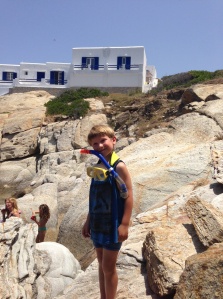 I liked snorkelling because you could breathe underwater and I saw wonderful rocks and a daddy sea snail and a baby octopus. Also a fish and a sword fish and a half fish on the ground and some little fish. It was very cool.

Then I got out and dried myself in the sun. I found some gold rocks. Then we all went to the pool and I loved snorkelling so much that I snorkelled in the pool as well. It was a wonderful island. We gave the snorkelling stuff back to the diving school. The owners there are called Katherine and Jason and also James and Lynne. They are our friends and live in Greece on a boat.

Jason let me drive his boat. We love Greece. Then we got ready to leave and got our bags, we washed the sand off us and had a shower and I made a Mohawk hair style on me. Then we got onto a van that took us to the boat station. We got on a big humongous boat that took us to Heraklion and now we are waiting for our bus to home. Goodbye love from Emilio. 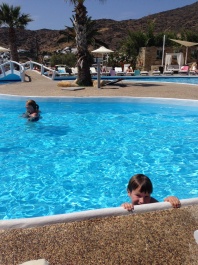 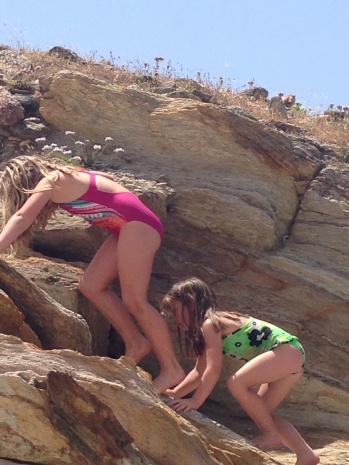 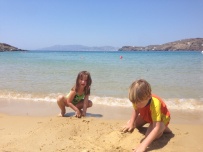