We were so lucky during our time in Crete that we could have not just one but two special visits from our wonderful friend Desley. Such a fabulous friend who was really the seed in initiating my bowen class in Crete and she made so many friends that love and miss her dearly.

Our times we spent with fellow Bowen Instructor and best friend Antonis Xiroudakis was just so brilliant and always full of laughs. We came to be known as the ‘3 Stooges’. Both times she visited she looked after the kids for 2-3 days so Sandy and I could go away – very spoilt. She just fitted in so well and became a part of the family. The kids affectionately call her ‘Mad Aunty Desley’ and this is what they had to say: 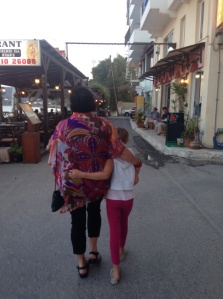 This is the second time that mad aunty Desley has come to visit us in Crete. She brought us some packets of loom bands and we have been busy making bracelets. She sometimes looks after us when mama and baba go out. Last night she took us out for pizza at our local pizza shop called ELA – the man who owns it is called Apostoli and gives us kisses and chocolates every time we walk past on the way to gymnastiki and swimming. By Yas

Aunty Desley is very funny and she makes up jokes and plays pranks. She got me some sunglasses and a white t shirt for my birthday. She didn’t come to iOS with us because she wanted to have a quiet weekend and she got quite seasick on a boat a few weeks back in Australia. She’s fun to have around. By Tobes

Aunty Desley bought me a big I cream and a little ice cream and a bracelet. I had a nice time with her and I love her by Zoi

Hello Desley came and we were looking out for her – then we gave up and then baba called out to us and then only ran to the door and opened it and we followed. We ran to Desley and jumped on her and almost made her fall over. Then we got her up to our apartment and she gave us sim a the lion king and a pirate movie on DVD. Then Also we got ready for bed and Giannis – one of baba’s students came over to do bowen on some of us. The we read a book called the famous five. And that was Desley’s first night. By Moochie

With Desley we went to someone’s house and her name is Joelle and she is French but she’s been in Greece for ages. We went for a walk in them out is s. It was Desley’s first hike ever. It was very very fun because it wasn’t too hard and you could just run up the rocks. For dinner we had lentils soup made by Joelle. It was awesome having Dessie visit and it is nice to have her around. My favourite thing about her is everything! Goodnight Desley – kalinikta in Greek.
By Kiki