Chich (uncle George) came to visit us the week before my birthday. He only stayed for two days cause he’s so busy with his work in London. We went to lots of coffee shops with him. He loved the galakotbouriko and Freddo cappuccinos. 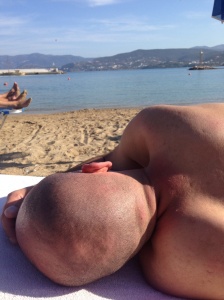 He got very sunburnt by lying on the beach. He wanted to make his wife Sally jealous by getting brown while she was in cold London. He picked me up a couple of times after school. We love him very much, but I love him the most. By Yas

No – actually I love him the most. Chich loved to sun bake on the beach while we played in the water. He also liked to go to a cafe called Melissa – a lot. They have very good galakotbouriko and Freddo cappuccinos. My Chich is very funny and that’s what I love about him – by Toby 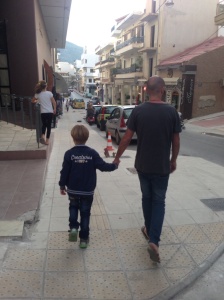 ‘What do you call a smelly Santa Claus? – a Farta Claus’
I told him another joke
‘Why did the toilet paper roll down the hill? – To get to the bottom.’

We had lots of fun and then we went back home and had even more fun playing games – some of the big kids were doing homework – Chich is the best uncle in the whole entire world – and Ricky as well don’t forget – he’s cool. Chich is my nouno as well and Sally is my nouna. – that’s all love from Moochie.

How many people can we get into one selfie? 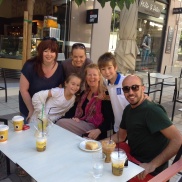 Chich at a cafe with ‘the girls’ 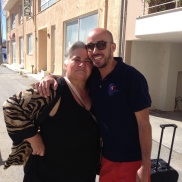 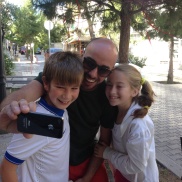 Chich is the King of selfies

Chich with Yiayia at their first Cretan cafe 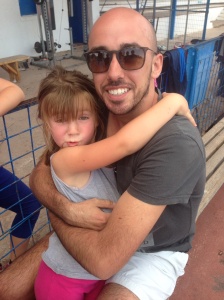 I loved playing in the sun with Chich. He picked me up from school and took us out for an ice cream at Dodoni. We walked around the lake together and went to the park. I love him up to the universe and back to the bottom of the dirt – that’s how much I love Chich and Gigga and Sally and grandma and pa and all my cousins. By Zoi

Chich came from London to see us for only 2 days but it was awesome that he came. I liked going to the beach with him – he sun baked and we ran around and played with the sand and got in the water to swim. It was funny how Toby and Yasi were telling Chich off for having his T-shirt off on the way back from school but he was hot and wanted to get some sun. When we arrived home Chich was saying ‘hello strangers’ to mummy and Moochie and Zoi and they were saying – ‘we’re not strangers’ and Chich said ‘I don’t know you!’ It was so funny and Chich had his top off which made it even funnier. It was so awesome having him in Crete. Actually I love Chich the most.

Bye Chich – see you in June