I’m so so glad we had a trip to Israel – the highlight for me was definitely seeing our friends Martin and Carolyn and their absolutely gorgeous kids – Alex, Marcus and Zahra. 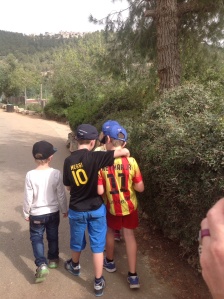 I was really touched when I read Toby’s blog and he said it was like they were best friends forever within 10 minutes – and that is what it felt like. I’m sure we’ll have many more family holidays with this amazing crew.

Second highlight was definitely my mum’s excitement at being able to visit all the religious sites we managed to squeeze in. One day she said ‘I don’t know how I can ever repay you – I’ve seen Christ’s birth, his death/resurrection and now his baptism’. She was genuinely so excited. 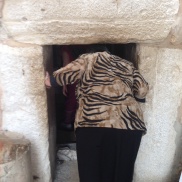 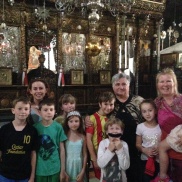 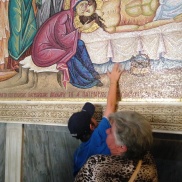 It was also interesting how much religion has rubbed off on the kids. Sandy and I are spiritual and I believe in the sanctity and appreciation of all religions. However similar to the pope’s recent comments I believe that all religions deserve respect and under all that humans have interpreted from them they all have the basic principles of love, faith and respect for one another. We have baptised our kids because it was important to my family and they have gone to church whenever they are with my parents generally. Anyway what I’m trying to get at is how excited some of them were to experience the birthplace of Christ, or the church that housed the important stages of his death etc. 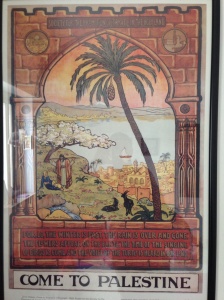 The two places we went to in areas A were Jericho and Bethlehem which were both brilliant and eye opening – how a simple checkpoint can make the world look so different. I found Jericho so laid back and relaxing and the ‘Lemon Tree’ Restraunt we went to was so delicious and great entertainment for the kids.

As I mentioned in a previous blog Bethlehem was a bit more stressful for me as I realised we weren’t insured with the car we were driving and the wall Israel built around the city made it look a bit bleaker to enter into to. At least we had freedom of movement due to our passports which is very different to the lives of most Palestinians.

Israel hasn’t really been a burning destination on my personal list of countries to visit. We basically went there mostly to see our friends and to make one of my mum’s lifetime dreams come true. However it was so brilliant in so many ways. Having said that though – I found it incredibly difficult in so many ways also – the systematic and blatant discrimination against the Palestinians was quite difficult to bare. Most of the people reading this blog will be used to hearing the words ‘West bank’, ‘Gaza’ and ‘Two state solution’ on the nightly news a few times each week.

Before I tell you my thoughts about this week we spent in Israel I just want to make clear that I am not in any way anti-Israel or anything like that. I did however struggle with many things I heard. Firstly I read some newspapers while I was there and some of the things I read or heard were:

The Defense minister said ‘you can fly over Israel in less than 7 minutes – of course we want more land’
A comment of the homeland minister was ‘of course Israelis who marry Palestinians have the right to live together – just not in Israel’. I heard that it can take up to 12 years to try to get residency for your partner if they are Palestinian with the Family unification visa. So basically if you are Israeli and marry a Palestinian it is not likely you’ll be allowed to love in Israel.
The Foreign minister (who is so right wing he makes Netanyahu almost look left) said ‘There is already a Palestinian state – it’s called Jordan.’
Netanyahu himself said ‘we are a beautiful country in an ugly neighbourhood’.
Senator John Kerry who is working on the Israeli – Palestinian Peace Talks described the situation as Apartheid. I would have to agree as in the city of Hebron which I read about and chatted to some people about, the situation there is quite apartheid like. There are many settlers in Hebron even though it’s in the West Bank. In the middle of the street there is a waist high barrier – Israelis can walk on one side and the Palestinians on the other. The only problem is that the Israeli side is 2/3 of the Palestinian side and the Israeli side fits a car to drive through but the Palestinians can’t drive there and aren’t allowed to. I was quite flabbergasted and wished it wasn’t true but alas it is.
Now most governments around the world are not so nice to certain minorities or favour the rich and powerful etc but I guess I haven’t witnessed it so blatantly before on a personal level in front of my very eyes. In the area of East Jerusalem where we were staying – it is mainly a Palestinian area (I think Area C) though most of the houses don’t have permits so many of them are given demolition orders. Many people are able to get a stay off the demolition for up to 5 years but others aren’t so lucky. Out of all the building permits applied for by Palestinians, from what I hear, only 1% are successful.
There is a law (I can’t remember the name of it cause most of the time I had my mouth open agasp and thought ‘are you serious – that can’t be right!’) that if a Palestinian is away from his house for more than 9 days then the Israeli authorities can take it in their custody. Just 9 days. Also if it is believed that the actual owner on paper doesn’t live there (ie/ a cousin lives in an uncle’s house) then again they can take it. It’s quite outrageous.
As I said we were staying in Palestinian East Jerusalem – though that is quickly changing also. A few doors up there was a settler house (which means Israeli citizens have moved in and is often a house that is either seized by the authorities or bought through an agent in a predominantly Palestinian area of the West Bank). 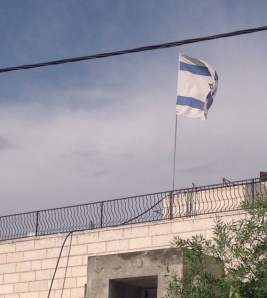 There was a massive flag pole on the roof with a very big flag and then also another flag like a curtain draped over the front door which was on the other side of big gates. There was also a guard on the roof pretty much most of the time. I just presumed that most settlers would want to live in Palestinian areas because it was cheaper to buy property but some want to live there because they believe it is there promised land.

Anyway – back to the flags – I didn’t think it was quite possible that there could be anywhere in the world where there are more flags than the USA but it’s official – there are definitely more Israeli flags per capita in Israel. Walking past the big settler house I described earlier I was pretty amazed at the flags so I had to ask the question – where were all the Palestinian flags (I didn’t even see one). Well apparently if you put up a Palestinian flag you can be charged with inciting violence and whilst it may not be a ‘go to jail’ type of offence the police can go through all your family records and if you have any unpaid fines, other irregularities or your house is not ‘legal’ then you’re in trouble. Apparently if any settler called the police due to violence from a Palestinian then the police are there within two minutes (in Jerusalem) though there are many cases of violence from settlers where the police are much slower to react. This was very evident in a few videos I got to see of settler violence in Hebron.
Gaza is literally an open walled prison. The borders are all closed, even the tunnels into Egypt are now all closed. The only way out is the sea and it is patrolled heavily – fishermen can only go out 3km and even then they are sometimes fired at. Gaza is 11km by 41km with 1.8 million people livings there. It is one off he most populated places on earth. Hamas are obviously not the most ’embracing’ government but the reality for most everyday Gazans is very bleak. There is not much variety of food in the shops. It is very expensive and there is only about 8hours of electricity each day – you can’t even run refrigerators on that – in the blistering heat.
I almost got to the point where I didn’t want to read any more newspapers or hear any more stories because I found it quite outrageous and horrifying. 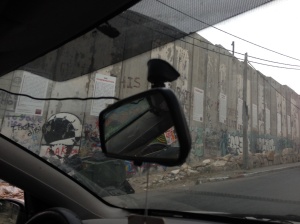 I could go on and on and on about the wall and the ‘extra’ land the Israelis are taking in the name of security……..and about the Bedouin villagers that have their shacks demolished etc. One last unbelievable story I read about was that the Israeli army had created a firing range. Well they have to practise don’t they? Well yes they do, but there were 8 villages in between. So they had to move during the exercise……and what happens when they’re not in their homes for more than 9 days – yes they can’t come back. Shocking.
I’m starting to sound anti-Israel though I’m not. I just agree with John Kerry in his description of the situation as Apartheid – it definitely is in my opinion. It’s a beautiful country that many believe could be governed in a much more humane way. The two state solution was all worked out with the division of land, the old city was going to be a UN protectorate, the Israelis and Palestinians were going to share Jerusalem as a capital. Peace could be achieved – but it was thrown into the wind because it wasn’t enough land. I believe that one day there will be a two state solution (as it was pointed out to me – the Israelis wouldn’t want a one state solution because they would be a minority) but the amount of land in the West Bank will be so small – due to the incessant settlements.

To finish on a positive note, we had an absolutely awesome holiday. Carolyn and Marty were incredible hosts and our kids just gelled so so well. My mum had the trip of a lifetime with her visits to the religious sites. It was eye-opening and helped us to see the world in such a different light. 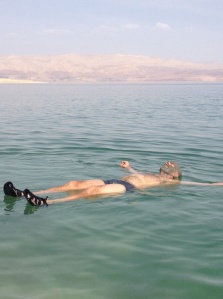 2 thoughts on “Israel – the highs and lows”