Staying at Alex and Marcus and Zahra’s house was lots of fun because they had fun things to do like table soccer, table tennis, wii and we made up a game where one person is standing up in a tent and the other person is outside the tent with a soccer ball and the person outside has to try to kick the ball at the person inside the tent who has to dodge.

There was even room for tents on the front porch and indoor soccer.

We played that game for hours. 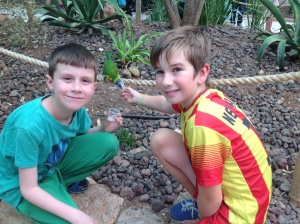 Alex and Marcus were fun to play with and we got along very well. I just can’t wait to see them again and go on another family holiday with them. 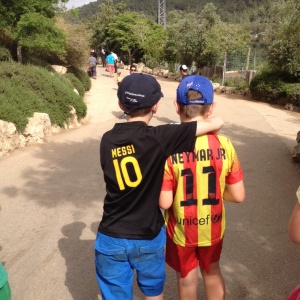 Mummy thought Alex, Marcus and I got along especially really well. On the first morning we were playing as if we were best friends for all our lives within ten minutes.

I slept in three different places. The first night we got in at 2.30am and I slept in a room with 5 beds. That night Marcus, Zahra and Alex were in tents on the porch. The next night I slept in the tent with Alex but the rooster over the road was very loud so we both moved inside on some couches where I had some of the best sleeps I’ve had for ages. 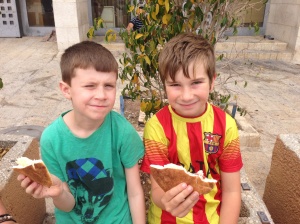 Marcus and I having lunch in the square in Bethlehem

On our 4th day in Israel we went to the baptism site where Jesus was baptised by someone who I think is called John. We had to go through a military area to get there and there were signs to say there were mines and to keep out but it was safe to drive to the Jordan river site where there was a car park.
We all got our bathers on and Yiayia bought a dress type of thing that most people that went there were wearing. I just wore a normal top. Then we went into the water which looked quite brown or muddy but felt very cool. 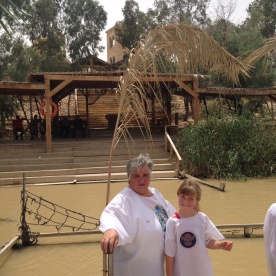 Can you believe that’s Jordan on the other side? 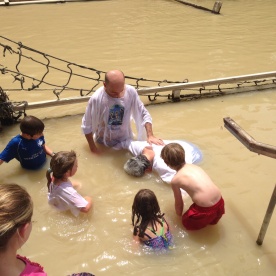 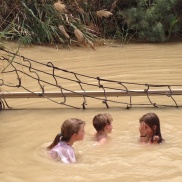 Long walk from the car park

We ducked into the water and had some fun splashing around. Yiayia went in as well – she has trouble walking but she always walks far and does special things like this. Though I think she’s walking better and has lost a little bit of weight since she’s been here. Baba wore one of those white tops also so that he could give it to Papou.
It was very hot that day so we stopped in at a Greek monastery to have an ice-cream and a look around but I was desperate to get home before Alex, Marcus and Zahra got home from school – and we did and it was so much fun playing with them again.