When I first heard about this soccer trip I didn’t want to go and was very nervous about it. About a month before the trip my dad got me whipped up excited about it. Then I didn’t think about it till a week before and I got nervous and started regretting that I was going to go. I’m so glad I did. It was just really fun, the hotel was good, the helpers were very friendly, the coach was nice, it was fun to hang out with the boys and it really helped my Greek language.

I kept a diary while on the trip and here it is. I also wrote a little bit in Greek and I will put that in at the end for those of you who can read Greek, or whoever dares to try.

So…. We spent a night on the boat, and we didn’t have dinner until 9:30pm. For dinner I had bolognese. We didn’t all finish until 10:30pm then our coach told us to get some snacks to have for the ride to Patra. So we did and by the time everyone had got in to their PJ’s and had got something for the bus ride it was 11:00pm when we started to get into bed. I was in a nice small room with two bunks – I was on one of the top beds. I went to sleep at 11:30pm. (my latest night since 2010). My friends in my room had alarms on from 6:00am-6:30am, so guess what time I got up??!
We got to the bus at 7:00am and their was another team going to the same hotel! So went together. There was a rest stop after 1 hour where we stopped and there was one of those machines where there were soccer balls that you have to get with a small crane. There was at least 10€ used by all the kids in that machine, plus at least 5€ of food for each kid. It took another 2-3 hours to get to Patra. The hotel that we’re staying at is called ‘ASTIR Hotel’. We found out who we were going to share a room with, I got put with a boy that is good soccer player, he’s from the 2004 group – that means the kids are born in 2004. I thought that I was put with him because his mum was with him, and she was the only one out of four adults that spoke good English. However I tried to speak manly in Greek.
We saw our rooms at about 11:30am and lunch was at 1:00pm so we chilled out. For lunch we had rice with chicken hidden in the rice and gravy. So what happened next??? We had to wait until 8:00pm for our dinner. Some people went to the super market to get some things for us for tomorrow. For dinner we had spaghetti bolognese again. So now it is 9:20 pm and time to go to bed. Good Night. 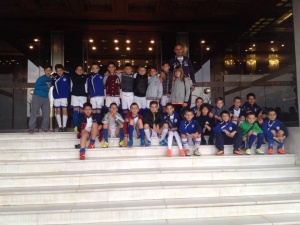 Since we had to go to breakfast at 7am most people were up at 6:30am. I was in a rush so for breakfast I had bread with some kind of chocolate sauce and salami. We then went to the football ground at 7:30am. The bus that we took to get to the football field was a double decker. First up was the 2004 class against a 2003 class!!! I played with the 2004 class and we lost 0-4 after the 2004 class played the 2003 class played we lost again 2-3. I was glad that I didn’t play in our 2003 class because they didn’t play well, our coach was angry and they played against a good team. We went back on the same bus as before with another team which I think was from Heraklion. On the bus it started to spit?! The pitch that we played on was a very good one.
For lunch we had pastichio, (but not as good as my yiayia’s) they give you like a whole plate full of food so I’m getting fed well! We had another two games at 4:00pm and we WON BOTH!!! The 2003 team came from 0-1 after half time and won 2-1!!! The 2004 team also won 1-0. I played in the 2004 team and got a few touches. At 6:00pm we got back and at 8:00pm we had to be at dinner. For dinner we had chicken and potatoes. It’s 9pm now and we have to be up by 6:30am. Good night.

Another 6:30am wake up call! I noticed today that when we go for breakfast the sun has not even risen yet!
For breakfast today I had some kind of a chocolate cake and a croissant with chocolate sauce. After breakfast we waited for about half an hour for the bus that would take us to soccer field. Today I played with the 2004 group again and I was put in my favourite spot – Right hand side – the 2003 group were really impressed with a run that I did.

I got the ball at about half way and dribbled it all the way close to the goal line. On the way two people tried to get the ball off me and they stopped the ball but I kicked the ball through their legs and continued my run. I also did a scissor kick from a corner but it did not go in. Today both teams won, the 2004 team won 4-2 and the 2003 team won 1-0. On the way back their were four teams on the bus including our two teams. Both teams are going well, the 2003 team were third before the match today and they have another game in the afternoon and the 2004 team were second before the match today! For lunch we had pasta carbonara. At 3:00pm the 2003 team played and the 2004 team went along too but we did not play. They won 3-0, and there were some good goals. After we waited for the bus for half an hour it came at 6:00pm. We got back to the hotel at 6:30pm and went to get the keys which we left in the reception. I left the key when my room mates were out and they came to get the key while I was gone. When I got back one of them was there but the other wasn’t and the one that wasn’t there had the key! So everyone but me and one or two other kids had a bath before dinner. For dinner today we had rice with beef. Well, I better say goodnight.

I started off the day by waking up and being ready by 6:45am and we were going to breakfast at 7:45am! I got the wrong and thought that my coach said that we have a game at 7:45am. Today we played for first place and we won! But for some reason we got put in the third place. Not sure how that worked out. So after that we hang around for a bit and at 10:30am we got the news that at noon the 2003 group was to play the 2004 group and guess what happened next?! The 2004 group cracked it because they knew that we were a good team. We played games until the match started. I got put with the 2003 group and we won 6-1! We finished at 1:00pm to find the final of all the 2003 teams ended with a draw – and guess what they were doing – penalties! ΣΥΕΛΛΑ won the penalties and there was another game doing penalties! That game was played by about 15-18 year old kids and guess who won – ΣΥΕΛΛΑ again, and after the last penalty all the teams of ΣΥΕΛΛΑ and a few fans all ran out on to the field to celebrate the win.
After we had to wait for at least half an hour until the medal presentation. All the players from my team got a medal and the team got a trophy and all this just for both teams coming third! After the medal presentation there were lots of photos. Even my coach got every kid for our team to get a photo with one by one the kid holding the trophy and we had our medals on. By the time the bus came it was 2:45pm we got back to the hotel at 3:00pm. We all went up to get our bags ready and to maybe have a shower. We went to our doors to find that they wouldn’t open because we had stayed longer at the hotel than expected and the key had expired. Then the cleaner came and opened all the doors so we went in got our bags ready and had a shower. We went down to the bus, but about a quarter of the bus was full and we were 30 all together so some of us had to squash up! We are now on the bus about half way through the trip to Athens. We did not have lunch so our coach gave us bananas and sandwiches. We had a break for about an hour away from Athens and I didn’t get anything but I was given a doughnut. When we were on the bus again the man sitting next to me gave me some of the dark chocolate in blue wrapping that Baba often buys. Then my team started singing the bus down. It was very loud but also fun to hear all the songs they knew. It was nervous but it was lots of fun. 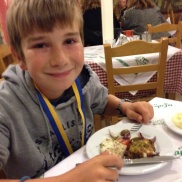 I was really excited about meeting baba at the port in Athens. One of my friends spotted my baba first and then all the team kept yelling – ‘There’s your dad!’ I had a sleep in and now we are having breakfast overlooking five monuments that are at least 2000 or more years old – including the famous Parthenon. I’m excited to go back to our village for Easter. I can’t believe it’s snowing in the middle of spring when it didn’t even snow in the middle of winter when we were there. I can’t wait to see it.

One thought on “PATRA SOCCER TRIP”