We went to a gorge and we stayed a night in the gorge camping. After brekky the next morning mama and baba let me wander by myself – I went up a mountain and had a wonderful view of the Libyan sea. Once I was on the top of the cliff there were a few places where you could climb down. I tried 3-4 ways to climb down before I found a way to do it safely. It was very fun – along the walk I saw a goat with a kid. It was very cute. The walk as really awesome. I thought I was doing a good job by myself – like i almost climbed down a few ways but then changed my mind cause it wasn’t safe. I was trying to explore safely and I did. I was having such fun by myself and I only thought once or twice abut the others worrying but I thought they would go to the beach and try to spot me. Mum and the others were worrying about me a bit apparently and when they saw me at the beach they said ‘Toby Toby where have you been?’ And I had to tell them my story. Here are some of my photos:

I told them all about it and said that I had to take them back that way so baba said that “it would be a good place for a Xmas photo” – he went back to the tent to get the Xmas hats. While we were waiting for him to get back we went looking for a few rocks. We found some awesome rocks, green, pink, brown, with stripes, all sorts of colours. Then after we did a bit of searching we found some good rocks to climb on and we went climbing. There are a few good pictures of us climbing.

But before baba could get back it started to rain pretty heavily so we took shelter and decided what to do. We thought we would go to the campsite and go into the little church. So we ran back, got our bags and went into the church and waited for the rain to die down a bit. Luckily we packed up our campsite before we went exploring. So we walked back to our car and decided to go to another gorge walk before visiting Antoni’s (my Baba’s Bowen friend) parents for the night.
But that is also another story.

When we camped after we put the tents up we went climbing really high.
I liked seeing the goats when we were leaving the campsite.

I  liked Matsala gorge but sometimes we fell over cause there are lots of loose rocks and it was steep.

I walked on a big long log with mummy to a little rock island. Our feet got a tiny bit wet.
I collected lots of rocks or about 30 rocks.
We had bikkies and roll ups for brekky cause we couldn’t cook – just cold food.

I slept in the green tent with mummy Emilio and Yasi – I was supposed to sleep in the gear shed part with mum but I squished in between Yasi and Emilio – I took Yasi’s sleep mat cause mine was wet and Yasi had to sleep on little thin blankets. We didn’t have a tent pole in the gear shed because we forgot it at home because we stuck it behind our wall map so it wouldn’t bend and we forgot. Mummy used a big stick instead.

AGIOFARANGO – THE GORGE OF THE SAINTS 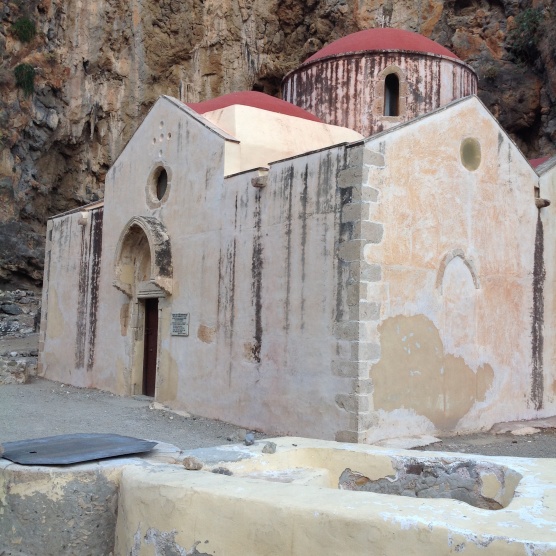 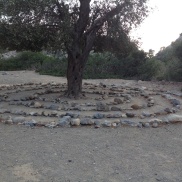 AGIOFARANGO gorge is not only an excursion through rocky crags that leads to the sea, it also apparently has mystical powers because over the centuries it has been chosen by hermits for their spiritual headquarters. I wonder if that was the reason that as soon as it was dark (just before 6pm) and pretty much pitch black since there was just a thin crescent moon, the kids thought it was a bit scary and wanted to leave. The weather closed in and it was very windy and noisy at night. Pretty spooky in a very ‘golly this is amazing’ kind of way.
By Baba Miliking

We went to a gorge – my baba’s friend told us about it. The gate was so small that Baba couldn’t fit through with his big pack. There was a church and a fire pit. There were nice lovely rocks – we climbed on them. We started doing the tents and then we had a little play and then we went onto the beach for a walk and then it became night time.
The next morning we packed up and we did some climbing on rocks and we went to the beach. 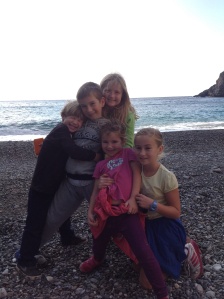 The big kids were climbing dangerous rocks. Toby asked us if we can go for a walk but we didn’t so he went by himself. Then we went looking for him and and found him at the beach. It started to rain so we found a rock and hid under it.

Then we tried to run quickly and get to the church. The church was good because there was a picture of Jesus. He was holding a sign.
Then we waited and started walking and came to a town to get some water then we went on a other cliff gorge walk. We had to come to town to get water because there was not enough water in the well and the rope was just a bit too short at the gorge where we camped.

On Friday morning we had the day off because it was our town’s name day and there was no school. So we went on a drive to a gorge. 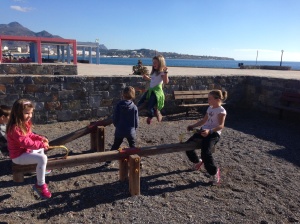 First we went to a town called Ierapetra in the south of Crete. We looked at an old Venetian fort and played at a playground. There were children protesting in the town but not sure why.
So we drove on around a very windy road and stopped at a beach for lunch. We had sandwiches and dips. We played with the rocks on the beach. Mum and Baba went swimming.
Then we set off to the gorge – most of the way we read a book we’ve become addicted to (Famous Five) – we took turns reading – we finished the 2nd book just as we got to the gate of the gorge. It was very bumpy on the road when it became a dirt road.
We parked our car and got our things out and set off to the campsite near the church. The was a church in the gorge – it was pretty nice.

The first night we lit a fire and had a quick walk down to the beach. We had some supper – we had bread and cheese and tomatoes and tuna and nuts – not the most exciting but it was still nice. Then we went to our tent cause it started to get very cold and dark and started raining. A big wind storm blew in and made lots of noise and freaky sounds so some of us got a little bit scared.

It was still very early and got dark by 6pm so we cuddled up in the tent and watched a movie. Zoi’s bed got soaked before we fell asleep so she bunked in with me and Emilio in the small covered part of the tent and Zoi stole my mattress so I had to sleep on two thin blankets while they had the good mats. They are rollers so they kicked lots and I couldn’t sleep cause of the wind storm. 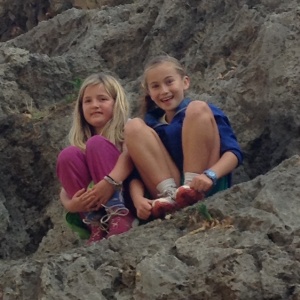 Morning came at last, we had breakfast and went rock climbing. We went for a walk down to the beach and after a little while playing in the rocks we took cover under some rocks and ran to the church were we put our bags.

On Saturday after our gorge walks we went to Antoni’s parents’ house.

Antoni is a friend of Baba’s. His parents’ names are Louisa and Stelio.
We got there about 4.30pm and it was still light – they have little puppies about 4 -5 weeks old. There were three puppies and one had a brown coat, with lots of wool. Another one was black and white with very fluffy fur. The last one was white and black with a big black patch on one of his eyes. Like a pirate dog. It didn’t have much fur – just short. 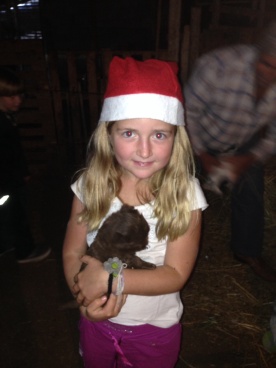 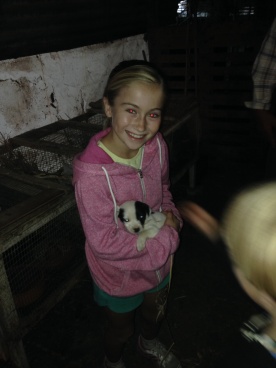 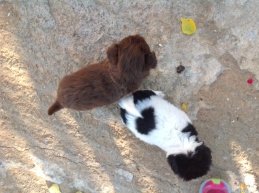 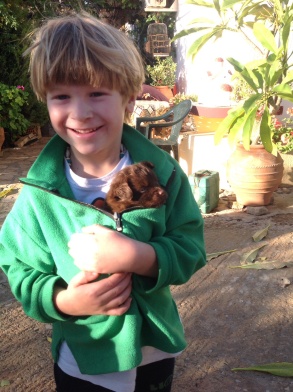 We were allowed to hold them and take the dogs inside (the mother wasn’t too happy with us). They had a huge Christmas tree inside – our Xmas tree is nothing compared to it. We played with the puppies until dinner. For dinner we had souvlaki and chips and salad. It was served the way a restraunt would do it and it tasted even better than lots of restraunts. Louisa was so pleased that we gobbled everything up. One of Stelio’s brothers-in-law and his nephew came for dinner as well. They were called Mano and Christos.
After we ate we went to get the dogs again for another little play. After a while they got a bit too tired to play so we put them back where they slept. They slept in some hay in a little barn sort of thing.

In there they had some rabbits. One had some little bunnies and one had three day old bunnies they were only about 5 cms. You could barely see them cause they were snuggled up with wool.
We did some drawing before bed. They were pleased with our drawings, I drew a Xmas tree with presents underneath and Santa holding his sack. Toby drew a horse. After that I drew a horse as well but it was galloping, (I’m not as good as Toby at horses but I’m getting better).
Then we went to bed. In the morning we got dressed and after that we obviously wanted to go get the puppies. And we did…….
There was some fights over who was holding each one. It was hard to find them at first cause they were hiding in the hay. 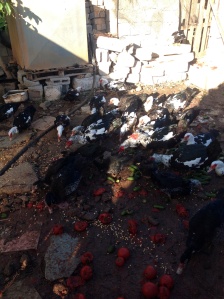 Then Stelio showed us the geese and the chooks and I got to go in and get an egg that was just layed. It had so much poo everywhere.
Later on we went for a drive to a dam and there was not too much water in it because it hasn’t rained much this year.

We went up to a village that Stelio knew some people it was called Skourvoula. We went into the little kafenio and we had to leave the puppies in the car. We got a soda each at the kafenio, Baba got a frappe as usual and mummy got a soda too. One of Stelio’s friends yelled out that he would pay for us all. That’s called ‘ego kernau’ which means ‘I’m shouting (or paying)’
Stelio bought every adult in the kafenio a raki which was vey nice of him. Raki is a very strong alcoholic drink so mum just a had a sip cause she doesn’t like it and she was driving.

When we got back Toby learned how to play Tavli which is like Backgammon and then lunch was nearly ready. We had rice and chicken soup – it reminded us of our Yiayia’s (Baba’s mum) soups.

I had some of what the adults were having also which was so delicious. It was chips and fish – yummy. Louisa is a wonderful cook. We got lots of things to take home like fresh tomatoes and cucumbers and cake and biscuits and lots of other things. We had a lovely time at their house. I have to end it here cause it’s dinner time. Goodnight everyone!