I was so excited when I got a text from my mother-in-law Jill, saying they might come and visit us in a few weeks. It was all so spontaneous! Suddenly they were here and 9 days just went so fast. 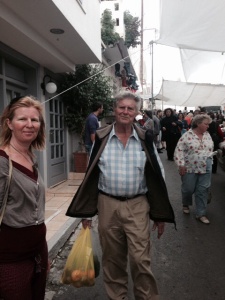 We all just loved sharing some of our new Cretan life with them. Walking kids to school, going to our favourite cafés, market mornings, slow dinners at yummy restraunts and having three nights in Chania.
We picked Chania because we knew Ross was interested in Australian War history and Chania was close to Souda Bay where the biggest Commonwealth War Cemetery is, so it was the place we chose to take them. So glad we did – lots of hotels in Crete have now closed for winter because the main tourist season is over – though my friend Antonis helped me find one that was right near the old Venetian wall, close to restraunts and able to accommodate 4 adults with five kids. It was such a great few days away – brilliant place. The kids have talked much about it. Though I must say the sunsets were so impressive. 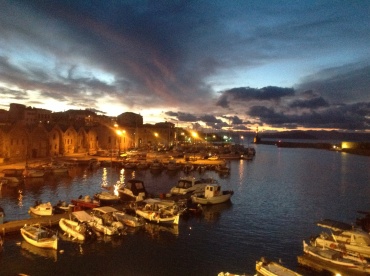 Every single meal was so amazingly delicious, Ross and I quickly found out that Amstel was much nicer beer than Mythos and Fix beer even better, especially when it was super cold. Jill and I worked out that the best Irish coffee (in Crete) was at the music cafe right next to their hotel! Every restaurant we went to always brings out some sort of ‘free’ dessert and of course ‘raki’ to drink.

Jill thought it tasted a bit like petrol and one of the kids asked her ‘how do you know what petrol tastes like.’ Though Ross preferred beer, we got used to a final raki toast to the night. Especially when Amy and Oliver arrived – Amy was a great raki skuller, and it was so great to see them both as well – marvelling at how much warmer it was to London.

All in all – one of the best memories for me was watching how all five kids soaked up the grandparent energy, had wonderful conversations with them and glowed in their company.

It meant so much to the kids and Sandy and I that Jill & Ross made the journey all the way from Australia. They’re lots of fun and they’re brilliant grandparents.

When my Grandma and Pa came up to see us we went to Chania and we stayed in the old town. It had lots of history about Crete. We walked along a Venetian wall and went to a war cemetery.
We also went to a top view cafe. 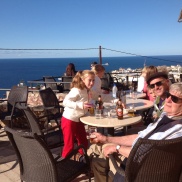 After a couple of days at Chania we went back to Agios Nikolaos. 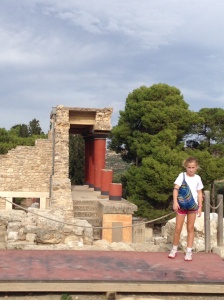 Amy and Oliver stayed one more night at Chania then they came to Agios Nikolaos too. The day after we got back to home we went to see a wreck of a castle. Amy and Oliver met us there. At Knossos castle many years ago (about 4000 years ago) it was all together but now it has fallen apart. 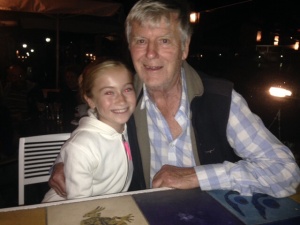 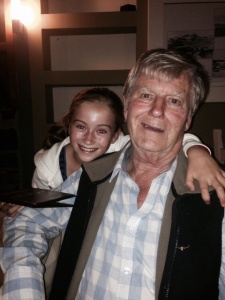 When we were in Chania I went out for a drink with my Pa and Baba. They had beer and I had a lemonade. My Pa said – “when you’re older always drink beer and not wine”. I said why – and he said “cause there’s less alcohol and you can’t get as silly as if you drink wine or those sugary drinks”.
He said that lots of drinks always have a nose on it. They told me to smell the beers and tell them what he nose was. It was very funny and a fun time with Pa.

One night we went out for dinner in Chania with Grandma and Pa. I was teaching my Grandma how to say ‘ohi’ (όχι) which means no. I have a habit of picking up the Cretan accent when I speak Greek, so I was actually teaching her how to say it with a Cretan accent which is like ‘oshi’ instead.
Oops! It so was funny – partly my fault but we had a good laugh. Here’s the video of it:

It was very fun having Grandma and Pa over in Crete. I miss them so much.
By Yasi 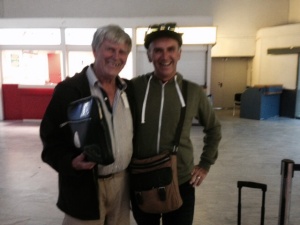 Aha – we caught Pa with a man bag

Grandma and Pa arrived in Crete on the 19th of November. They flew from Melbourne to Doha and then to Athens and then to Heraklion. It took them 32 hours door to door. We picked them up at Heraklion airport in a car that we rented. It takes one hour from Agios Nikolaos where we’re living to Heraklion – one of the big cities.

After a few days, on the 21st of November we went to Chania. Chania is on the other side of Crete. The four parts of Crete are Chania, Rethymno, Heraklion and Lassithi. We live in Lassithi and Chania is in Chania province. The drive to Chania was long – it took about three and a half hours.

We stopped in Rethymno, the city which is in Rethymno province. We had lunch at a cafe called Store 311 which Baba had been to before. He went with our friend Desley which you’ve heard about in other blogs and a Bowen friend called Antonis. He thought it was great that’s why we went there.

When we got to Chania, it was in the afternoon and it was raining and we dropped off our things and got some warmer clothes – our hotel was called PortoVeneziano – that means Venetian port in Italian. I went to cafe with Pa, mummy, baba, Zoi, Emilio and Yasi. Toby and grandma watched tv trying to get some cricket news. There was some English TV.
At the cafe I got a hot chocolate – so there was no way I could have gotten cold. When we got home we got ready to go out for dinner. It was a delicious traditional Cretan Restraunt but there was no fish because Cretans don’t traditionally have much fish – they love meat. I loved the potatoes they were a bit lemony flavoured. 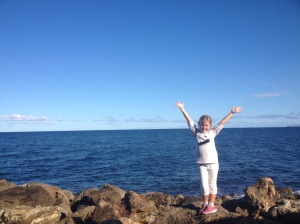 The next day we went for a walk on the Venetian port wall and it lead to a castle 3/4 of the way and at the end there was a lighthouse. We loved to climb the rocks around it. 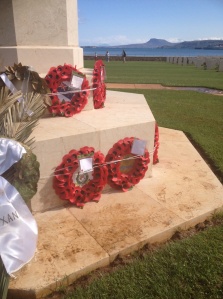 After that we went to Souda Bay by car to the war Cemetery. We walked around the cemetery and there were thousands of people from lots of different countries that helped Crete in the 1941.
There were the countries of Australia, NZ, England, Wales, Scotland, South Africa, India, there weren’t Greek graves there but of course they were definitely in the war. 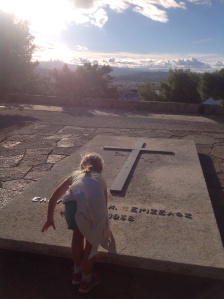 After the Cemetery we went to a leader’s grave – his name is Venezelos – it didn’t really look like a grave – it was just a flat place to stand on and a star in the middle above where he was buried. When he was the prime minster of Greece, Crete wasn’t part of Greece and he made it a part of Greece in 1912.

Then we went to a cafe called ‘Koukouvagia’ which means owl in Greek. Baba had already been there with Desley and Antonis when they travelled in Crete for a few days. The cafe had delicious food and it had a fantastic view over Chania.
We had a bit of a rest in our rooms for a bit – Toby and I were sharing a room with Grandma and Pa so we went back and played Yahtzee and Monopoly deal – it was cool. That night we had dinner close by so we could go to bed a bit earlier.

I am so glad that my Grandma and Pa came to visit us and I miss them so so so very much.

I asked Jill if she could take a photo of Pa and I with my iPhone – possibly the first time she held an iPhone. Well I handed it to her and the outcome was 122 photos – not sure how that happened but she could give the paparazzi a run for their money – here’s some of the pix: 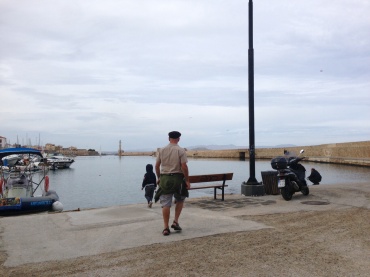 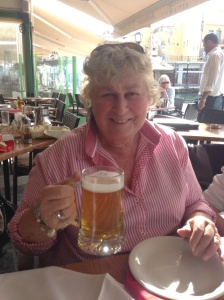 Couldn’t resist this photo -possibly the first time Jill held a beer – maybe next time we’ll get her to taste it.😄