Toby’s trip to the doctor

Guess what happened to me on Friday night?
I had to go to the doctors but I didn’t break my leg or do anything serious like that – everyone in the Agios Nikolaos soccer team has to have a check up to see if their heart and their health is ok. Most of you might think it was scary or boring but it was actually really fun.
Let me tell you why it was fun – because I wanted to know how much I weighed, my height, and I found it interesting to see what sorts of instruments they use. I’ve never been treated in a hospital in the 10 yrs I’ve lived – except when I was born at the Wangaratta Base Hospital. 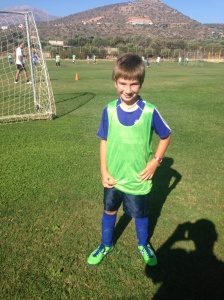 The instruments that the paediatrician used was an instrument that they put to your chest and listen to your heartbeat in different spots – baba said it’s called a stethoscope. One thing that was very interesting was what she did with a thing that she used that had 3 attachments together and she had one of them on my arm and another was a blow up thing and when she pushed it pumped up the thing on my arm. Then she had the stethoscope on my arm past the thing where the attachment was. She was checking my bold supply and pressure while the arm thing was really blown up. Baba said I need to learn its name – I can call it a blood pressure machine or a sphygmomanometer – such a long word isn’t it.
I always wanted to know how high I have grown in the 6 months I have been away – I have grown 4 cm in 6 months. When I left I was 134cm now I’m 138.5 cm. My weight has gone up too- I’ve put on a kilo since we’ve left. The doctor couldn’t really believe that I hadn’t been to a doctor before except to get my ears checked. She gave us the form we needed and she wanted me to do blood tests just to check how things are. My baba said ‘why if he’s ok?’ She said ‘just to see’ but I don’t think we’ll do that.
In am loving football (but it’s called soccer in Australia) -the soccer they play here so so different to home. They play with much bigger goals and pitches and they train 3 times every week for an hour and a half as well as a match every Saturday or Sunday. 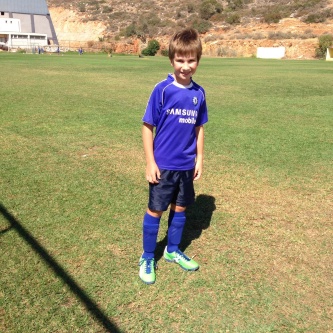 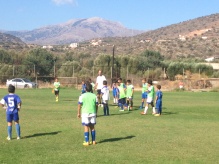 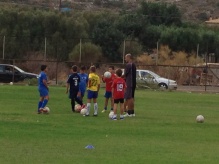 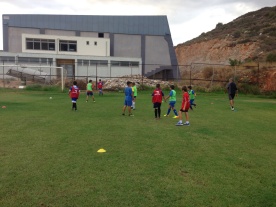 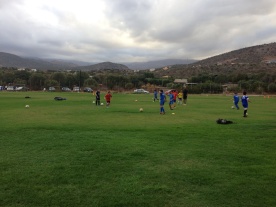 I’m in the Agios Nikolaos team with kids that were born in 2003. Our uniform is blue but the match colour of the uniform is white. I don’t have a uniform yet cause it hasn’t arrived but I just play in blue shorts and a Chelsea top. The boys here are much better than me – much calmer when they get the ball and they don’t hesitate as much as me when they get the ball and someone is charging at them. When I was in Australia Mr Van Bergen and my other coaches didn’t allow us to bump or push anyone out of the way so that I could keep the ball but here when you are just about to get the ball off them they give you a good bump. They are much better keeping the ball in the air with their knees or feet but I’m practising with my new ball that Uncle George (the first) and Aunty Meri got me. When baba watches me he thinks I’m getting better and better. I got one goal in the last two games and have had about 15 touches. 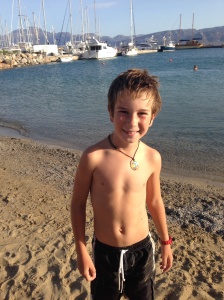 At training the other day we were about to start training and some other kids and I were practising so I kicked the ball to the goals and as I kicked it bounced a meter and a half from the goal posts and bended back into the goals and got in. When I was telling the family at dinner they laughed and laughed and said – ‘wow we should make a movie called ‘Bend it like Toby Miliking”. I thought it would be too expensive to make a movie cause we would need to find actors and directors and a place to film and all that kind of stuff. But the whole family laughed and said we could make our own by ourselves and Kiki was going to play Jules – and Yasi was going to be Jasminda – I was going to be a soccer boy, Zoi wanted to be the older sister who gets married. Mum is going to be the mother but we thought Giagia could be the grandma who says ‘you shouldn’t be encouraging her to run around in shorts – she doesn’t even want to learn how to make spanakopita’. And Giagia’s best friend Teta vasa could be the woman who measures up the dresses to make and says -‘ no problem I can make these little mosquito bites look like juices juicy mangoes’. It was pretty funny.

I’m getting better at soccer and bye bye.
By Tobes