Toby and Kalika and I went to a Elounda to cook on a class excursion today.

We went with a mother of one of our friends from our class called Ioanna. It takes about 20 minutes to get to Elounda -it’s a famous place full of resorts and hotels. Lots of rich people go there.

With a famous chef it was so much fun. We chopped up, all the ingredients. We chopped tomatoes, onions, mushrooms, leeks, basil and mint. The chef made us taste some leaves that smelt and tasted like a lemon but I thought that was a bit weird.

Then we made some brown dough which is like usual dough with brown flour and we added olives from a plate. The veggies were mixed with rice and then we rolled out the dough and put the rice and veggie mix in it and then folded it over.

All the veggies we chopped

Putting the veggies on the dough with some olives

Pressing it down and baking it

We pressed it down and put them in a wood fired pizza oven. It was like dark pizza with stuffing in it. They were really delicious. The chef is a bit of a joker and funny guy like lost of chef are, cause he was putting flour and chilli powder on our cheeks – it was really funny. 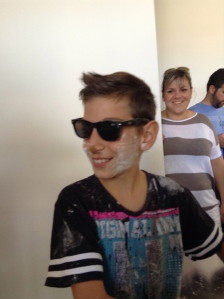 One of the guys called Mihali had flour on his cheeks and all over his shirt and he wouldn’t smell the chilli powder so the chef put it on his nose and his mum put his sunglasses on and then he had a photo taken – it looked so funny.
There was also another chef from the Restraunt who was the helper and she new English and the famous chef said to her ‘Don’t use English’ so we could learn more Greek and today was the most Greek I’ve understood so far. I could understand nearly everything they were telling me and they were telling me a lot. It was a fun day.

When we got home from Elounda we played at the beach and we came home to do Greek homework and then Toby, Kalika and I went walking on our own to look at some some nice long sleeve tops for Toby for when we go back to the village and it might be cold. 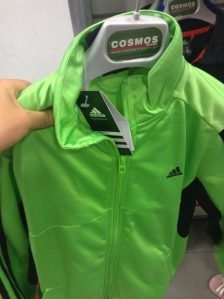 Kalika and I already found some yesterday. My baba’s mum – our Giagia, sent us some money so we used that money to buy our tops. We also went to the printing shop to buy some postcards to send. We will send some to school soon.

It was fun on the way there – the view was good, and we talked about school and stuff like that.

This is our teacher Kiria Athanasiou

When we got there it was really exiting to meet the master chef of Greece, called Mr. Vazevanis. He was really nice, we met my whole class there with our teacher.
For 3 hours we spent chopping, cooking and eating the food that we made.The food was unbearably delicious.

I had about 10 pieces of the little ‘brown rolled over pitas’ or I don’t really know what else to call them.
First thing we did was go in and wash our hands with detergent.

Then we went to the kitchen which was outdoors so you can see what they’re making when you sit in the restraunt and it is right next to the sea and also in sight of Spinalonga Island.Then we all went to a chopping board and started chopping the stuffing.

Igli’s creation
We had a little fun with putting the flour all over the table to roll out the dough – we had so much fun that we started throwing the flour on each other, making flour marks on our arms and T-shirts and even putting flour marks on our faces.
My friends Igli and Mihali and Giannis were playing so much that we got it all over our clothes and faces – it was enormous fun.
Mihalis had two big flour marks on both of his cheeks and then the chef let us smell some spicy thing that looked like cinnamon – then Mihali wouldn’t smell it and the chef put it near his nose and it went so close that after the chef took his hands way Mihali’s had a brown tip on his nose.

Rolling out the dough was also very fun. It was hard cause there was only one rolling pin but it was also fun pitting the olives and put it into the stuffing and put the stuffing in with the dough.

Then we played while we waited for the food to cook – Igli and I and other friends were taking photos of the chef and food and the beautiful scenery. Then we were allowed to save some for our parents so we took 3 back to baba and he said they were delicious too. Mummy wasn’t home so we saved her some.
By Tobes

Today I got to go with the big kids class to a restraunt called ‘The Ferryman’ in Elounda. We did some cooking.

When we sat down after working we could see Spinalonga Island – it looked tiny in comparison to the other big islands around it.
Yasi was the one who spotted Spinalonga first – it was so camouflaged by the others islands. 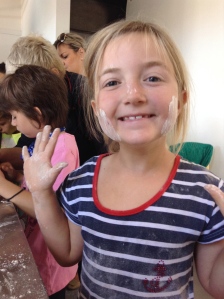 The meal was delicious – I had about 10 of the little pitas – in Greek ten is deka. It looks like ‘δεκα’. I enjoyed the excursion because I love cooking and eating the delicious food.
By Kiki

3 thoughts on “Our ‘Master Chef’ excursion in Elounda”