Start of school…….Start of work…….

As I sit on this bus and on the right I see the beautiful blue sea – more beautiful and blue than a precious gem, many tourist hotels, villas and beach umbrellas dot the coast. 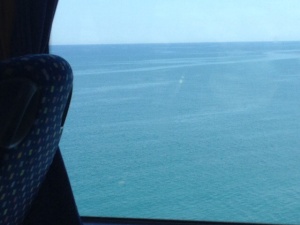 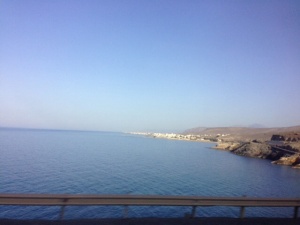 The coastline can be quite dramatic

On the left side of the bus a rocky landscape, scenic, gorgeous and simultaneously harsh as it has been basked in the sun and heat year after year. Small villages of white homes dot the landscape. 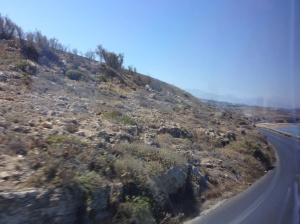 Rock on one side, sea on the other 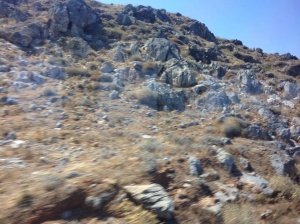 Today the kids started school or at least they went for an hour to attend the official blessing by a priest (I so feel sorry for them having to wear a long robe in this heat) – right outside in the courtyard of the school on basketball court – all kids decked in their finest clothes, hair gelled up or in fancy braids and not a single hat in sight. 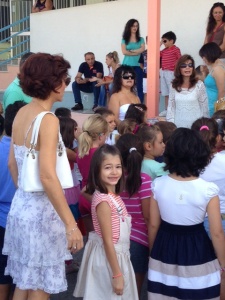 Lining up for the official blessing to open the school year 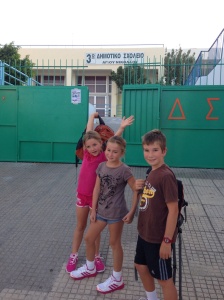 Entering school on the first day

No sun smart policy at Municipal school #3. Though admittedly the sun is very different here in Greece – it is hot but doesn’t seem as harsh – the ozone layer above possibly much more intact than in Australia. None of us have been burnt the whole time we have been away (even Sandy) – though most of us are certainly quite tanned.

Anyway – at the official blessing and the following address by principal and parents’ association head, many of the children where talking and not listening – I think if I was the teacher – many a detention slip would’ve been given out. When I was a student teacher at Salesian College – Rupertswood I was always told by my mentor George Toth – ‘don’t smile, give them clear instructions and boundaries and make sure they know you mean business’. 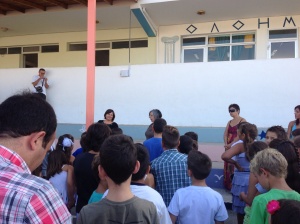 The principal addressing the school

They all had to stand in their class lines (Thankfully Yasi and Toby are together and in a small class of 16 kids though their teacher was absent today and Kalika is in grade 2B with a lovely teacher called Ms Soula) and then they were lead upstairs to their classes to get acquainted etc. I was so nervous for them but also so proud of them for just waltzing up and going with the flow. There school is a concrete jungle though at least they have a view of the sea. 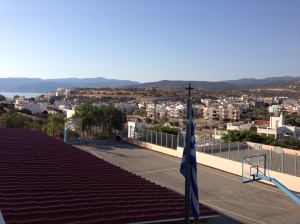 The courtyard where school starts with prayer every morning 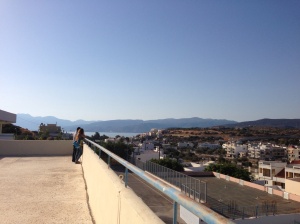 The concrete school – with a view

They will obviously learn language incredibly quickly though I’m sure it will be a struggle for a few months. Fingers crossed. Emilio and Zoi on the other hand are in the compulsory prep year of kinder (Kinder is one optional year at 4 yrs old and then a compulsory year at 5 years old followed by Primary school which is grade 1-6), though in a different direction to the primary school so Sandy took them and they were very happy to be in separate classes and since they are used to a school environment they just went and played while many of the kids who were going to kinder for the first time clung to their parents or had to be peeled off them. So that was a relief. My children love me telling them the story of my first day at school – Merri Primary School in Nth Fitzroy, Melbourne. I was just over 5 yrs old and didn’t know any words of English at all (I had moved to Australia about a year and half before though was surrounded in a Greek environment and my parents didn’t know any English) and I just clung onto my mum’s skirt and cried my head off, lovely Mrs Finger (my Prep teacher) had to drag me from my mum and I was so nervous and shy that I didn’t know how to ask to go to the toilet so I wet my pants – it was horrible. My kids always giggle at the wetting my pants scenario!
Tomorrow is the first full day of school where they’ll get their school books etc and start classes – they seem pretty ok about it at this stage. We’ll see – and their school experience will definitely be the marker we use to see if we can stay here in Greece for a year.
Getting close to Heraklion now – I had to come to the big city today to buy my massage table (tried to find a second hand one but second hand stuff doesn’t often happen in Greece – they don’t like using other people’s stuff – which explains why my mum cringes every time we tell her about our humongous savings at op-shops that we love to frequent.) 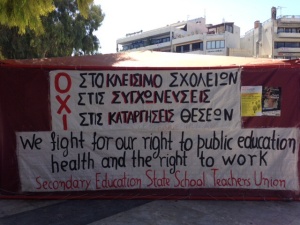 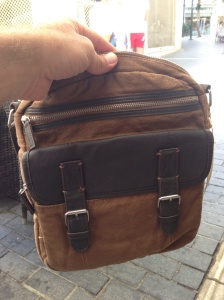 Managed to find a man bag in my shopping – don’t know how I survived for 6 months without!

Tomorrow I have my first Bowen client and I’m quite excited cause I really love treating people with Bowen and the € much needed as these Miliking kids eat so much food and despite Greece being cheaper than Northern Europe it still is quite an expensive country to live in.
Have an awesome day.