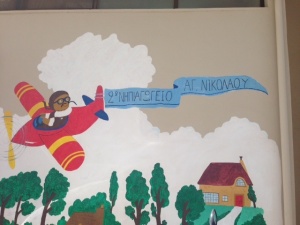 This is our school sign painted on the wall

Today was my first day at Prep which is called ‘nipia’ in Greece. Guess what – my teacher’s name is Katerina. I was a bit sad when mummy left because it was my first try at Greek school. We played this awesome game – trying to beat my friends racing – I won.

This is the playground outside

We had a break for some food and I had a hard honey toast sandwich which is called a ‘paximadi’. I also ate some pistachios and a choccie bikkie that mummy made.

There are some fun puzzles and games

Some other boys and me played a trick on our teacher – we knocked on the table like someone was knocking on the door and she had to go to the door and no one was there – she didn’t see us knocking. It was funny.

By The Pirate bear

I liked the kitchen toy at my class and there was a pretend computer and a pretend phone. My teacher is called Lefteria and she’s really really nice.

I walked in and was a little bit brave – I wasn’t scared of the teachers but scared a bit of the other kids. When I came to little school – it’s called ‘Nipia’. I did puzzles and other people in my class did other games and things.

These are shapes with lots of Greek words

I had two really hard breads with butter and I had grapes to eat. We went out to play and the teacher read us a book and my mummy picked us up.