Crete 3rd Sept 2013
Today Baba and I went to Heraklion which is the capital of Crete (a big island state of Greece) and the population is  about 200,000 people which is a biggish city but definitely the biggest in Crete.

We went to have a day together before starting school next week. Actually we are now on the bus going back home to Agios Nikolaos which takes 1.5 hours. 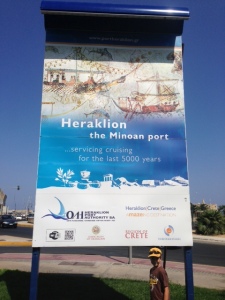 This morning we arrived in Heraklion about 11am and first of all found a cafe to have a cake and drink – I got to choose whatever I wanted so chose an iced chocolate and cheesecake – which is one of my favourite desserts. It was delicious. 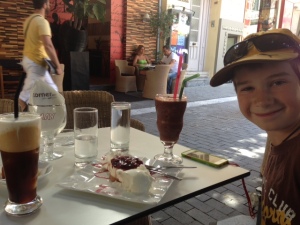 While we were eating and drinking we got to play ‘Words with friends’ on my iPod. I am almost addicted to this game – it is like scrabble but you can also text the people you play with. I play with lots of friends and aunties and some people I don’t know but I never text random people I play with cause they are strangers and I don’t know what they are like, so my mum and baba said I could only text people I know like for instance I like to play my Aunty Jenny and Aunty Catherine and Xander and Edan and my mum and baba, my cousin Cara, etc. I like playing it because I learn new words and I just find it fun. When I don’t know what the word means baba won’t play me back unless I use the word in a sentence. For instance, I played a 54 point letter word with baba – it was ‘flays’ – do you know what it means? It is to ‘strip off the skin’ my sentence was ‘poachers flay the skin off a tiger or a crocodile and so many other animals’. 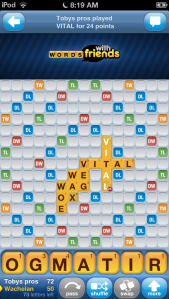 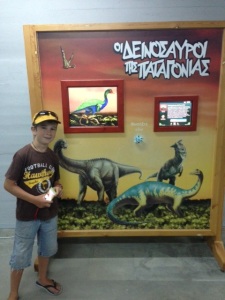 The museum had won a Trip Advisor award. Trip Advisor is a really good app when you’re travelling – it tells you the best things to do and stay at in lots of different places. It also allows you to breastfeed in the museum which is a good thing. 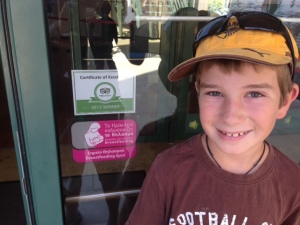 I found out so many things that this blog probably will be the longest blog I’ve ever written. There were so many new things that I don’t have the time to write them all down.
The top two floors were about animals in the  mountainous areas, shrub lands and deciduous forests – that means forest where plants lose their leaves in autumn.
Now, there were so many new animals and only a couple that I had heard of their names but I didn’t exactly know what they looked like – I’m going to do a photo gallery of them and there should be a caption at the bottom of each photo if you click down the bottom of the photo. I’m also going to write the name in English and Greek cause I have to practice my Greek. One of the most interesting animals was the Glass Lizard – it looks like a snake.
Most of these animals were dead and stuffed but there was a part of the museum where there was living animals like Iguanas and Cretan mice, Mediterranean Newts and lots of different snakes.
In a part of the museum was a dinsosaur exhibition from Patagonia in South America. There were lots of dinosaurs we hadn’t heard of. One of the very stange dinsosaurs was the Avarezsaurus which was only 1ft tall and up to 5ft long.
The Eropator lunes is is only 3ft long. We were really surprised at the size of these dinosaurs because we thought dinosaurs were always big.

This is a display of how they find dinosaur fossils. 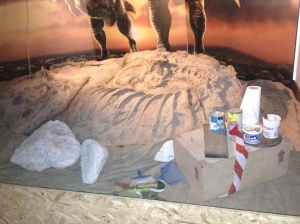 Here is the photo gallery of some of the animals – I think I’ll have to do another gallery next time I go cause there were so many interesting animals and I didn’t take good photos of them all. I don’t think any zoo keeper in Australia would have heard of all these animals.

The Short-toed eagle (Φιδαειος) is a medium sized eagle that eats mainly snakes.

The Fallow deer (Πλατωνι) – not many of these have been left in Southern Europe. They are quite different to the Asian deer.

The Cypriot Mouflon (Αγινο) was almost extinct in the 20th century but today are successfully protected which means they’re not allowed to be hunted or killed.

The Western Capercaillie (Αγριοκουρκος) lives in fir forests if there are shrubs and fruits to eat. They are nearly extinct.The Cypriot Mouflon (Αγινο) was almost extinct in the 20th century but today are successfully protected which means they’re not allowed to be hunted or killed.

The Lynx (Λυγκας) is a wild cat that eats mainly mammals and land birds. It lives in Eurasia (which is a combination of Europe & Asia).

The Blunt Nosed Viper (Κουφη η Φινα) can be up to 150cm long. They are very venomous and eat small vegies and found on Milos Island in Greece. There is also an active volcano on this island that erupts every 20,000 years.

The Stoat (Ερμινα) is a small carnivorous animal. It is apparently has very good quality fur so is hunted lots. It can even catch larger animals than it’s own body. Ones that live at higher altitude become more white in the winter.

The Marmot (Μαρμοτα) is a rodent that is a herbivore. It lives in the mountain areas of Europe up to 3,200m above sea level.

The Golden Eagle (Χρυσαετος) is the most common eagle in Greece. It can be found in open plains and Rocky Mountains with little vegetation. It apparently flies for hours until spotting its prey.

The Capra Ibex (Αλπικος Λιγαγρος) – is a wild goat which was almost extinct and lives in the Eurasian mountains. They have been protected since 1821!

The Wild Boar (Αγριόχοιρος) weighs 30-100kg and has longer hair than a domestic pig and big canine teeth.

The Eurasian Eagle Owl (Μπούφος) is a nocturnal bird of prey and eats mammals and larger animals like hares and Short Toed Eagles and it hunts by surprise attack.

The Brown Bear (Αρκούδα) is Europe’s largest living carnivore. It used to live in lots of places but is now endangered. In winter it hibernates in caves or dens that it digs by itself.

This is the Wolf (Λύκος) It lives to about 20 yrs old and the ones in Greece are smaller than the ones in Central Europe.

The Crested Porcupine (Ύστρικας) is a large rodent with long quills on its back. If threatened the porcupine will stamp its feet, shake its quills and charge the disturber by its back end first and will try to stab the enemy with its quills. These attacks have killed lions, leopards, hyenas and even humans.

The Egyptian Vulture (Ασπροναρης) is a small scavenger bird which usually feeds on what larger birds leave behind.

The Cretan Wild Cat (Κρητικός Αγριογατος) lives on mountains and preys on birds and small mammals. It is a mix between European and African Wildcats.

The Red Fox (Αλεπού) is a carnivore with red coloured fur and a fluffy tail. It eats mice, lizards, birds, eggs and insects. We have some of these back home in Whitfield.

The European Glass Lizard (Σαυρόφιδο) is actually a legless lizard that grows to about 1.4m long. You need to look carefully but it can be easily distinguished from a snake by its ears and eyelids.

The Horned Viper is a venomous snake and lives in sand. It covers itself with sand while it catches its prey.

Dabb Lizards live in the desert where there aren’t many plants though can live up to a year without food.

The Cat snake has its fangs in the back so it is harmless to humans. The venom of the Cat snake is used more in the digestion than for killing prey.

The Italian crested Newt – is pretty big and found on the coasts of Italy & the Balkan countries. It can live in wetlands from sea level to 2000m of altitude.

The Greater Flamingo – can be found in wetlands of Greece & they like staying in big groups.

The Addax is nocturnal and adpated to the desert but has disappeared from most areas of North Africa due to hunting.

The Egyptian Cobra is probably one of the most famous snakes cause it lifts its neck up when threatened.

In Crete they found pigmy hippopotamus bones which lived here from between 800,000 to 400,000 years ago. They have been found in 17 different places – mainly in the Eastern part of the Crete. There was also a pigmy elephant that lived here. 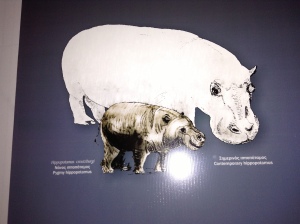 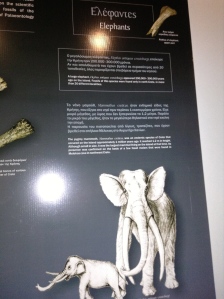 A large elephant appeared on Crete approximately 200,000 to 300,000 years ago. Fossils have been found in only North Crete but in more than 20 different places. 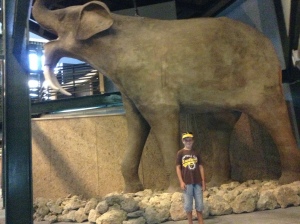 The Dienotherium of Crete was only discovered in the year 2000AD. Crete was covered in lots of forests 9-7 million years ago when the Deinotherium lived on the island. 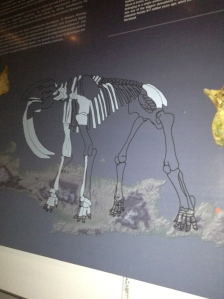 We learnt about earthquakes and went on an exhibition about earthquakes – where we got to feel what an earthquake was like – it was amazing – we were sitting in chairs like at school – on the floor there was a machine under it and it made fake earthquakes. It showed us a usual earthquake if you’re on the 1st floor of a building then same earthquake on the 3rd floor. Then it showed us what it felt like to be in two of the biggest earthquakes in the world – first one was in Tawain (forgot the year) and was 7.6 on the Richter scale. Then we felt the Kobe earthquake of 1995 in Japan which was  only 6.9 on the Richter scale but felt much worse because it was very close to the surface of the earth. It was awesome to feel them. We were sitting up the front & had a bookshelf near us & lots of books fell down.

This is a picture of me trying to make a tsunami. A tsunami is a massive wave caused by earthquakes under the seabed. The most recent one I’ve heard of was the one in Japan in 2011 (I think) which was over 10m high & killed lots and lots of people.

There are lots of volcanoes in the Mediterranean. Some of them are active but many are extinct. One of the most recent ones that erupted was in Nysirios island in 1888.

Santorini is a very famous volcano – which is actually made up of 5 islands – it last erupted on 1950 AD and they described it as dramatic. Baba said we have to go there while we are in Greece because it is amazing and beautiful and very interesting if you like geology (rocks) which we love.
It was a fantastic day.
By Tobes