Teta Mirka is old and tall but not as old as my Papou (he’s her brother) cause he is older than she is. She never got stuck in a lift cause she lives on the first floor – the door is actually a normal door with a handle that opens normally – you don’t need to go in a lift. We watched some telly at her house.

She is the best cook – she cooked delicious food like potatoes and beans and I like everything she made. She went up on a hill we very morning to exercise with my Baba.

I swam in the big pool which is fun. There’s a water slide pool too – Toby always puts his feet up and I jump over his head instead of his arms. 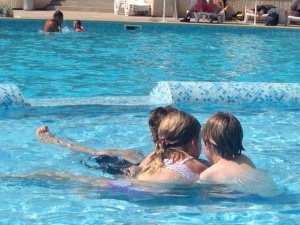 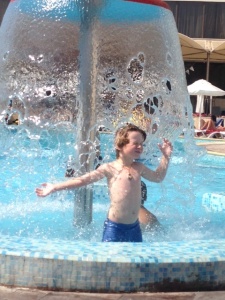 Toby is lots of fun because he just is. The pool was just so amazing.

Kate is our cousin but she’s so big – she’s 20 years old. Her mum and dad are Rene and Mitko and we played with them lots. They had a giant’s TV which was epic. They took us bowling. Zoi and I won. 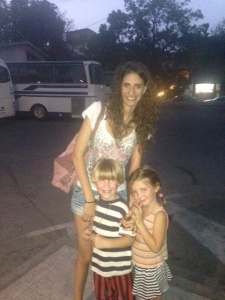 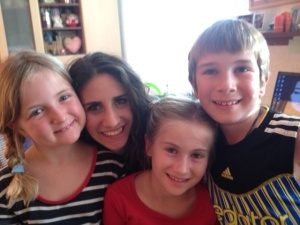 The bus trip from Bulgaria to Greece was fun cause we watched tennis and I got to see a gynormous trophy that one of the girls won. We didn’t watch it for very long – just the last episode because it was a night bus and we did have to sleep. When we woke up very early at 5 in the morning we were in Greece in a big city called Thessaloniki. We had to wait for a train to my baba’s village.