I had got so used to the idea of Sandy being almost like an illegal immigrant in Moldova I wasn’t really worried about the border crossing exiting Moldova like I was two days ago when we entered. I thought that really, what could they do apart from fine her or make her pay a bribe? As I mentioned in my last blog we passed through Transnistria where guards normally come onto the train and make you pay anything from 50c best case scenario or all the hard currency you have cause they search you – worst case scenario. On our particular day we stopped in the capital Tiraspol though no one entered the train so eventually we kept going and of course the Moldovans don’t have Border Control cause they don’t recognise Transnistria as being a separate country – all very confusing. You could sense a deep relief from the Moldovans on the train as we crossed the river Dnesitra into Moldova proper. They were home.
Anyway we couldn’t do much about anything on Sunday so we had a great day frolicking around Chisinau.

We stumbled upon a magic Moroccan Restaurant that had such incredible food and very cold beer – it is so hot now and we are getting further and further south so it can only get hotter. Today (Monday) we sorted out our train ticket to Bucharest (apparently so much cheaper if you buy it on the day of departure). 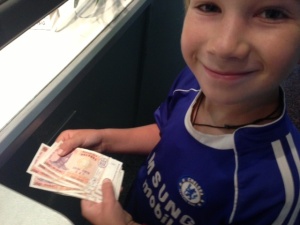 We also went to the required Immigration building to get registered since we had no entry stamp. That all happened very easily without fuss and the lady didn’t notice that Australian passports needed a visa.

I thought we were home and hosed and not needing to worry at all…….until we got to the border. 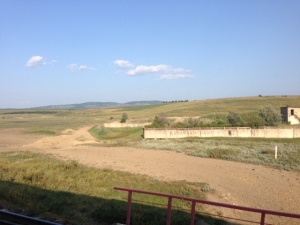 The lady who was ‘our customs guard’ was so smiley and friendly and nice and she didn’t ask for any bribes or anything – though she was extremely professional and made it clear that not following protocol was not an option. She came back on the train and explained that Australians need a visa – we just played dumb and said ‘Oh really!’ In a very innocent tone. However then she said “you’ll have to come off the trip and sort out a visa tomorrow and then try to get on tomorrow’s train. Not sure if it was Zoi’s gorgeous little smile or me welling up in tears and explaining that would be extremely hard for the children and I. She asked for any documents that proved she was married to a Greek. Well I pulled out our marriage certificate though that wouldn’t work cause it had to be a Greek issued document. So I pulled out a copy of our Greek ‘status’ document and that wouldn’t work either cause it was in Greek! Eventually she implied for Sandy to come with her -all the while being very polite and friendly also. She even looked exactly like Aurelia – the Portuguese lady in the movie ‘Love Actually’. I thought how could she look like her and also keep Sandy away! So sandy went off while we sat in the train and fretted and watched the jolts and starts of the train being put back together after the wheel gauge change – another fascinating process to watch. 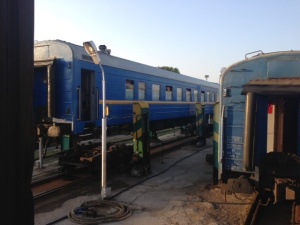 Anyway sandy was gone for over 45 minutes but it seemed longer than that. The kids really didn’t want to get off at the border and also leave without mummy! However I had resigned myself to meeting up with Sandy in two days in Bulgaria. How bad could it be?
Then the train started to move and I thought that we were even left without our passports which would’ve been really tragic.  Just as I thought that Sandy’s gorgeous face appeared at the door with all the passports and a smile – what a relief! Apparently the four people attending to her situation were all very nice, no one asked for a bribe ( though one guy asked if she ever wants to come to Moldova again – Sandy thinks he was going to let her pass through though the others were going to stick to professional protocol. They also kept asking ‘Can she not stay till tomorrow?’

Lucky there were five kids and a husband on board waiting! Eventually they came across a file of someone who had a similar situation and in some safes they found some visa papers etc and eventually issued a visa on the spot – highly unusual but obviously also possible since it had been done once before at this post. I was so glad to see her – back in this extremely hot and sweaty train carriage without opening windows in the rooms and only every second window opens in the hall way though you really need the door closed so that it isn’t too bright to for the kids to fall asleep. It was surprising that as we passed the Romanian side of the border and easily passed through the customs check I felt like we were home and safe being in the EU. A bit strange to feel that way in Romania as I grew up being told it was even more backward than Bulgaria and a strong bastion of Stalinist communism! Now it feels like home! Must got to bed as we’ll be in Bucharest in less than seven hours. Good night!

This is a picture of the tired kids at 6am waiting to arrive into Bucharest.
By Christos