When we were just about to leave Emilio fell into the Black Sea. But the sea is not black. He did water treading very well. But he was screaming because it was deep where he fell in from the jetty. The jetty wasn’t very high so mum put her hand in and pulled him out.

He got some cuts and scratches from the shells stuck to the jetty wall on his hands and ankles. 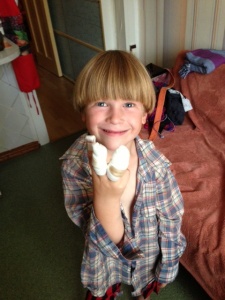 That night we had pizza at an Italian Restraunt around the front of the building from where we were staying.

The next day after skypeing our class and our friends the VBs, we spent the day at the beach. There were jelly fish in the water. Toby picked one up, they were not poisonous. Zoi and I played chasey in the water and that was really fun. The water was pretty cold. 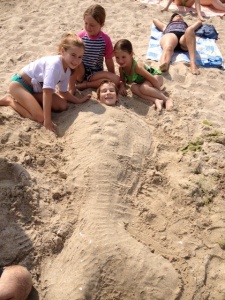 We were jumping over the bars of the pier and looking for jelly fish. At the end of the pier there was a logn strip of concrete where people walk along, mum, Emilio, Kalika and Toby walked along it.

When we were walking home we stopped for dinner at a French Restraunt. It was quality food and worth the money but it was also pretty cheap. The onion soup was delicious – it had onion and baked cheese on top. We also had mushroom soup and pasta with delicious vegies and cream and some mussels.
We went to visit a place called Arcadia which is a very touristy area of Odessa. It had a beach with so many people.

We hired two beds to sit on had a lovely day in the sun. So many people at the beach. We had a delicious drink called mohitos (my baba said to say it was non-alcoholic) – it had lime and mint and lots of ice.
The last day in Odessa we had to go back to the beach but before that we had a walk in the centre and walked up these famous stairs that let you look over the port. There was a statue of Catherine the great. 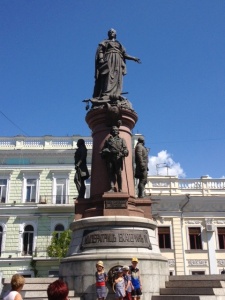 Irina and her daughter Saha took us to the train station. 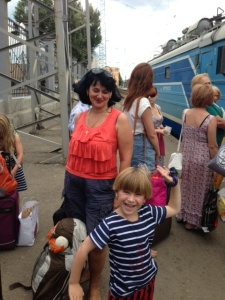 The train was a sitting up train. We watched some movies. It was only 5 hours train. It was very hot on the train.

We had rolls with cucumbers and tomatoes. We normally have noodles for dinner on trains but we didn’t thinks here would be hot water since it was a sit up train.
There’s a country called Transnistria and we went through it. Sometimes the guards come on the trains and ask for money for passing through their country which is not really a country yet cause Moldova won’t let it go. 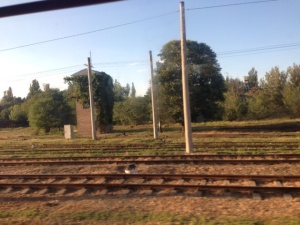 However the guards didn’t come on to our train. We were relieved.
By Yasi