My impressions of the Ukraine – is that the water in the Black Sea is a bit dirty and slimy because of all the seaweed. We still had fun in it though. We tried to look up why it is called the Black Sea and we think the best reason was because he Greeks named it and black was a colour that meant north and red was a colour that meant south so they called the sea to the north of Greece the Black sea and the sea to the south the Red Sea. 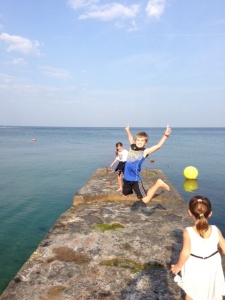 It was so nice to be at a beach again. We went to the beach four times in four days. We also went to a very good Italian pizza shop which was not far from where we stayed. We had great healthy pizza and had awesome garlic potatoes and excellent desserts. We stayed in an apartment of a woman called Irina and her daughter called Sasha. 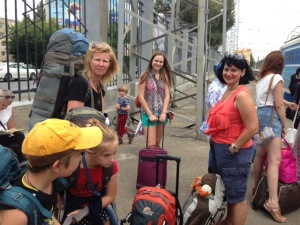 They were really nice because I don’t think they have ever had five kids in their little apartment and they were happy for us to stay there. They had their their home apartment upstairs. This time we couldn’t find a SERVAS person to stay with so baba and I found this one in http://www.airbnb.com but it was pretty cheap.

Mummy loved the colourful money of Ukraine. She normally looks after all the money supply. In Ukraine it was so awesome that she wanted to take a photo of it.

TRANSDNEISTRIA (or Transistria in English)
On the train to Moldova from Odessa we had to pass threw a country that is not a full country!!!

It is called Transnistria. It’s only recognised by Russia and they are still discussing between Moldova and Russia to see if they can make it a full country.

They declared independence in 1992 after the Soviet Union ended, there was a war for 5 months but then they have been trying to talk about it ever since. Moldova doesn’t want to let it go. It is separated by a river called Dneistria and that is why they call it Transdneistria – because trans means across from or over – so over the river Dneistria. It is a long skinny country.

My first impression was that it looked a bit poor. Baba said I had to do a little bit of research on the Internet before I could add Transnistria to the number of countries I’ve been to. The soil is apparently very very rich and they grow lots of things. The capital is Tiraspol. 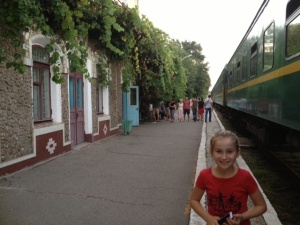 Transnistria is great – I can’t wait for it to be a real country!!!

One thought on “Odessa and Mysterious Transnistria”