In Moscow we stayed with a SERVAS host called Nikita.

He lived on the 18th floor of a building just across the road from the station of the last stop of the grey subway line. We were so glad we didn’t have I carry our bags or so long. In Nikita’s building there was a lift that was completely dark with no light. When we went on it was so dark apart from the red glow around the number of the floor that you pressed. It was a bit scary for the little kids.
Nikita picked us up at Leningrad station where our fast train from St. Petersburg arrived. Lucky he picked us up – it would have been difficult to find cause Moscow is such a humongous & loud city. 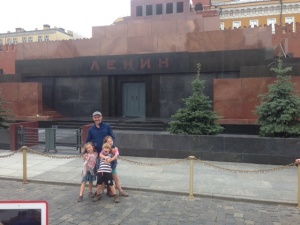 Lenin was a good ruler according to the Russians – apparently the remember him happily but they don’t like Stalin. Lenin was a Bolshevik who took over from the tsars in the Russian revolution in early 1900s.

We leant a lot about this stuff from Luba in Yekaterinburg and Pasha and Nikita in Moscow. They all spoke lots of English and knew lots of stuff.

On Sunday we went to Gorky park in Moscow which is now called the Culture Park. There were so many people. That day there was a navy or military festival and there were lots of people with blue and white striped T-shirts, waving flags and they were singing and yelling and having fun. At the park we got to pick a ride to go on. 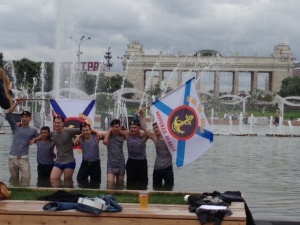 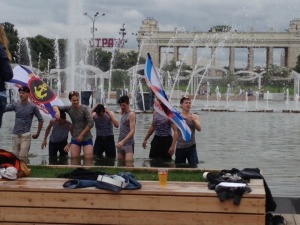 Yasi and I went on a jumping trampoline that was a good safe one but the harnesses were a bit tight and went up to my ribs. I jumped really high on the special trampoline – I hadn’t been on one for about two years since Melbourne.

After we were watching some people play volleyball we decided to have a wrestling game on the grass. So we got baba’s sunnies and hat off and tried to wrestle him to the ground. We got him to the ground a few times – they also tried to chase me and gang up on me but I was a little too fast for them.

As Emilio came charging for me I just pushed him another way – it was really fun. At the end Emilio ended up at my tail and I tripped and as I tripped I rolled my ankle. It was ok though – just hurt for a bit.