Hello – I went to a ger and there were lots of goats – I named them Cutie (brown), Toughnut (black), Tunnel (he is gold coloured) and Elvis is black with a white fringe. We named them these names because we were training them to not go to their mummies (its because they were becoming kids and we wanted to milk the mummies) and we were the people who were rounding them up. We used to go in their pen and hold them because they were so cute. Cutie and Toughnut were the cutest ones.

There was a little boy at the ger and one day he was nudie and he went on a wild horse with no saddle bare back and all nudie with his uncle, Janba. The little boy was 2 or 3 years old. He had a difficult name to say so we called him ‘You’re so cute’. When we say his name he doesn’t know that’s a name so he just nods when we say ‘Are you so cute?’ When we say – ‘you’re a cutie’ he smacks us but it didn’t hurt its quite funny. We played lots of games with him, we played lasso games and I was the horse and he caught me with a big lasoo. I was like his big brother. I lifted him up if things we played were hard. Sometimes he would take my Lego bits to his ger but his great grandma brought them back. 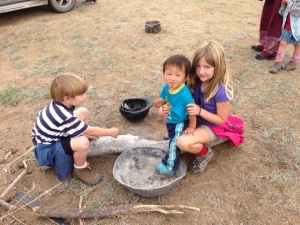 The horses were epic. We took the brown horse and the black horse for a ride to the well so they can drink water. Then we took both of them in the valley where there can be wind storms. We had a wind storm so we felt what it was like.

The food in the ger was good. I liked the dumplings most – we gobbled them up and I liked the little boy eating with us. He made such a mess – he didn’t have any nappies he used to poo sometimes in his clothes.

When we got back from the ger we went to see ‘Monsters University’ the movie, and we got our very own popcorn – we didn’t have to share. There were big monsters and small monsters and the biggest monster was on the green guys team and he let out the biggest roar. They learnt that they shouldn’t cheat in games but the big monster did.

The train ride to Russia was good because we all got to sleep together in the one carriage. We had two people on little beds except for mummy who slept by herself. It was exciting to get to Russia – there was even a fruit market that had delicious bananas.

Levi was 6 and a 1/2 years old, I’m so glad we met him cause we just played all day long. We threw so many rocks in the water, some were skipping rocks and some were bigger rocks. We tried to get them to land on the big rock in the water. We threw rocks at the bad plants that were very prickly. We went in the water the first day but it became windy so it was more colder. I liked sitting with Levi to eat dinner but now I cannot cause he is on a train and is going back to America where his real home is. We are still at the same place which is so fun.

There is a cute little puppy – it’s dad has died but its mum hasn’t, he bites lots and chewed up Kalika’s thongs. Now he mustn’t be very hungry – he was thirsty cause he drank up all his milk and didn’t even leave any drops – he got every single one.
By Moochie